It was bound to happen…

I guess you’ve seen all those fantastic crowd sourcing miniatures thingies on the interwebs. Kickstarter and Indiegogo seems to be filled with them, and I have been oh so tempted by a lot of them.
But, I have persevered! I have been proud of myself. I didn’t really need those figures, most were another period/style etc. I could say to myself that it wasn’t for me.

I browsed Kickstarter and Indiegogo for miniatures, just to see what was out there that I hadn’t seen on other sites or heard of.
Quite a lot of interesting stuff. But suddenly I saw a very familiar logotype. 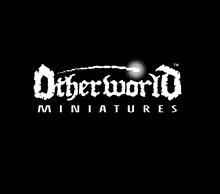 Otherworld - my number one favourite producer of fantasy minis. The recipient of much hard earned cash already. I bought my first Otherworld minis in 2008, amongst them the hill giant seen in my profile-shot.

They are making a massive release of old-school Dungeons & Dragons adventurers. Massive as in 4 sets of 12 figures each, plus extras.

You can pledge as little as $10 giving you one miniature, up to $280 giving you all four sets and a lot of extra nice stuff.

From the Indiegogo site:
“The miniatures will depict archetypal fantasy adventurers, human and demi-human, male and female, wearing practical clothing and armour and carrying realistic weapons and equipment. They will be posed for exploration, not combat. And these characters won’t be muscle-bound superheroes waving Vorpal Swords in the air - they’ll be grim-faced dungeoneers, a little bit down on their luck, and ready for action on your table-top!”
Yep, just the sort of minis I am looking for. 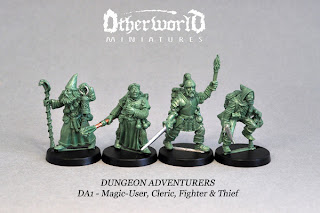 Notice that these guys wear backpack, just as they should in real fanatsy-life
What’s there:
”DAB1 – Dungeon Adventurers I – Human Male Characters (planned release – January 2013) 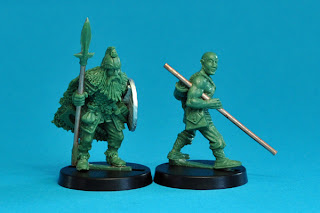 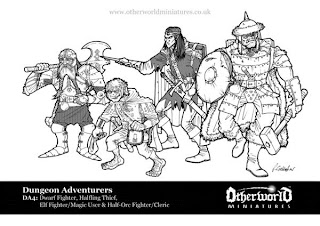 On top of that a lot of extra goodies as stretch goals are reached.

The question is, should I invest in this? It’s a lot of money, but minis I really would like to have/paint/use.

This campaign continues until October 24, so if I or you want to get in, now is the time.
Posted by Joakim Ström at 10:52