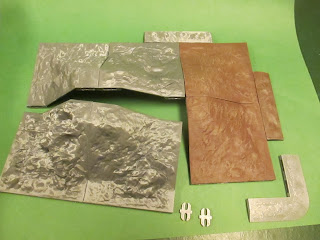 I received some pre-release files from Nick Fatchen/Arid Hills a couple of weeks before he started his current kickstarter. Looking at them and the information given to me made me rather enthusiastic, as I think the whole concept is great – modular terrain-pieces that click onto each other making hills, cliffs and much more. 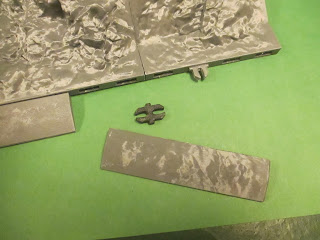 They click together using OpenLOCK, a proven system that I use for a lot of other terrain from Printable Scenery and others.
I’ve printed some different hill-pieces and cliffs to try out, and it all works rather well. I’ve noticed that I need to clean some of the connectors, especially those  printed down towards the printer bed. It’s essentially a couple of minutes work per tile, so it’s not a big deal.

When that is done the fit is excellent.
There are gaps between the tiles, obviously as they are tiles, but if that doesn’t bother you then you’ll have a very versatile set of modular terrain, with everything from hills to swamps to rivers to trenches (great!) to… well, lots of other stuff also.
I think the best way to de-emphasise the gaps is to simply paint the tiles uniformly the same way, so as to not highlighting the gaps. The pics on the kickstarter unfortunately do just that, highlighting the gaps, that is.
There is an obvious other solution, and that is to make permanent hills. You click the tiles together, glue and then fill the gaps with green-stuff or something similar. That way you can get great-looking textured hills with a minimum of fuss. You will lose the modularity though, but I think the end result could be well worth it.
I really like this set, and I think there are tons of applications for the tiles. I will definitely play around some more with them and will probably go for both modularity and permanent hills. Maybe a mix of the two, where I make half hills, or something like that, and put them together. There are so many possibilities.

This is really good stuff and definitely worth a look, as it is a great concept. Do check it out at Future Worlds: Landscapes - modular war game terrain on Kickstarter. You’ve got until November 8, 2018, when it ends.

They won’t become extinct after that, I’m told, as the concept will continue to be supported with new tiles and there will be a web-shop to buy it all or in parts. Stay tuned on that also, as I’ll give a shout-out when that is live.
Now it’s back to the printer. I need more edges for my hill.
Posted by Joakim Ström at 10:08