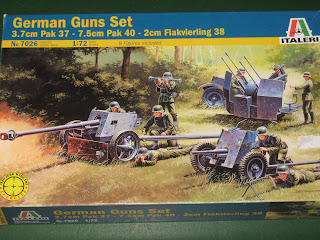 Do you see something strange in this picture?
Maybe you noticed part of the subtitle? 3.7 cm Pak 37….. Pak 37?
The real name of the 37mm German anti-tank gun is Pak 36 (or 35/36). So, Italeri didn’t get the facts right on the box. Embarrassing I should say. By the way, the kit is originally from ESCI.
This should have had me somewhat sceptical, but I really needed a Pak 36.
Opening the box and checking the stuff I became more and more sceptical.
-- There is a Flakvierling AA-gun. On the cover it deployed, but the kit is on its trailer in towed mode. That is quite a difference in my book, and makes it less useful
- The 75mm Pak 40 is in full recoil…. Really, it is moulded in full recoil. How useful is that? That makes its use quite more limiting than it should have been.
- The Pak 36 – well, that gun is what this review is all about. 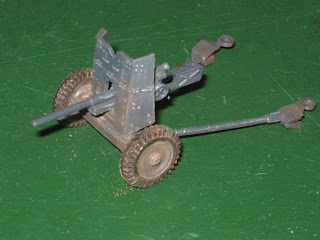 As you can see from the photos this is a crude model. Made of 15 pieces, it is chunky, lacks details and is really not a very good representation of the original at all. 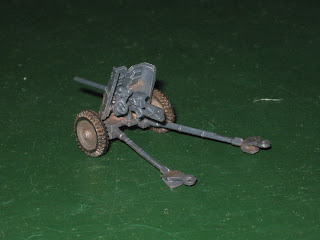 The box also contains four crewmembers for all three guns, and a further four men pointing, looking in binoculars or firing a LMG. The figures are OK but I would have liked some more interacting with the guns. 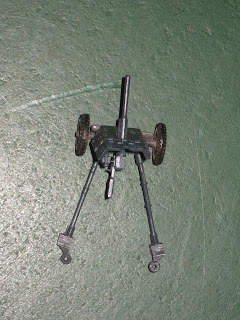 I’m not happy with this gun, and considering the other two models in the box, this was a real bad buy.
It will be used on the gaming board though, as it will withstand rough handling rather well, and from a meter away it will pass as a small door-knocker.
But don’t buy it.

There are other manufacturers of this mainstay of early war, so next one to be reviewed is from ICM and then Zvezda. Stay tuned.
Posted by Joakim Ström at 17:17