2013 has ended and a new year begun.
What happened and what’s in store for the New Year?
Blog
Hits: nearly 55 000 total
Posts: total 263, 89 during 2013
Followers: 85
I’ll have a give-away soon, celebrating 50K hits and some. I’ve found some stuff that should be of interest.
My goal for 2013 was to have at least 50 new posts – success! My goal for 2014 is about the same.
Crowd funding
2013 was the year of Kickstarters for me.
I received the first half of the Otherworld Indiegogo stuff during the autumn, and hope to see the rest soon. Lovely fantasy figures, but very late delivery.
I backed several Kickstarters during the year; Reaper Bones II (28mm fantasy), Winter War (28mm WWII), Shadows of Brimstone (28mm Horror Wild West), Battle Systems (28mm cardboard SF-terrain) and Call of Catthulhu (rules). 2014 will hopefully see a lot of boxes arriving, and the tin- and plastics mountain will grow enormously...
I will go very easy on Kickstarters this year. It’s not as if I really need more stuff... but Baker Company (of Winter War) will Kickstart their 28mm Balkans WWII-figures this spring. I might be sucked into that, if the Winter War figures turn out to be great.
20mm WWII - LRDG
My LRDG-goal of painting a bomber, two LRDG-vehicles, Italian vehicles and some terrain was a success, as I did a bit more than that. I also wanted to see a game played at a convention, and we did that too.
This year will see maybe a stray plane and vehicle bought for the game (the Italian Sahariana jeep is tempting), and I hope to do some more LRDG-games on conventions and at home.
20mm WWII – France 1940
My goal was to paint British vehicles, guns and soldiers, and I painted a grand total of five soldiers... That was a failure. I did build and paint some German and French vehicles though, so the year turned out to be OK but not great.
I have collected a nice reference library on WWII Britain and France, and that will come in handy during this year. 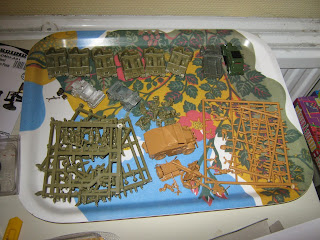 The painting table is full of British armour waiting for proper paints
The goal for 2014 is to paint all the British vehicles and guns, and a lot of them stand ready. I’m just waiting for delivery of some paints.
I also intend to build and paint the few plastic models of French and German AFVs I still got.
I got a delivery of some British and French armour that should come soon, but other than that I won’t buy anything before all armour is build and painted.
28mm WWII
Winter War figures, guns and vehicles from Baker Company will arrive during spring, and I will share the loot from the Winter War Kickstarter with Laffe and Thomas.
My goal for 2014 is to paint at least some of that.
28mm Wild West
This was the project that came out of the blue and hit me square on. It just happened, OK? I bought some figures and some terrain, and it’s growing.
My goal for 2014 is to get myself a decent set of skirmish rules and build and paint enough so that I can get at least one game in.
I will probably buy more houses from 4Ground, but with all the figures from Shadows of Brimstone that are bound to show up this summer/autumn, I won’t buy more than a stray figure or two.
28mm Fantasy and SF
My goal was to paint some fantasy figures and also some Infinity. Did do fantasy, but not a single Infinity figure.
Will paint more figures this year, but won’t buy more than maybe a stray figure or two.
Terrain
I did paint the Otherworld terrain pieces that I did get, and also some assorted desert terrain-pieces.
Nothing of the WWG paper terrain was built, though, and none of the buildings I had lying about.
All in all, a fail.
2014 will see me painting more 28mm SF/fantasy scenery elements and also some terrain-pieces for France 1940. 28mm terrain for the Winter War is a new unknown, we’ll see what happens there.
Trips
2013 was a good year, with the trip to Normandy. Fantastic! Gave me a taste for battle-field trips. I will probably not do another this year, but I will try to do a couple of interesting local museums.
The tin- and plastics mountain
It has actually shrunk during 2013! I got half of the Otherworld figures and also some purchases during 2013, but I have given away some WWII models I knew I wasn’t going to build. Also, one of my kids cousins plays 40K orks and he got most of my unbuilt boyz, ‘ard boys and storm boyz for a birthday present. Great to see all those figures come to use and be played with.
Good seeing the mountain shrink, as I certainly won’t see that during this year...

All in all, a rather decent year miniatures wise. 2014 will hopefully be as good or better.
Posted by Joakim Ström at 19:49