Yesterday Daniel, Laffe and I met for a day of winter warfare, or rather preparing for one of Daniels huge games, scheduled of April or so. Somewhere in the borderlands between Germany and France, US vs German troops.
What is needed is a lot of houses and a railway, and snow.
We are well supplied with ordinary houses, but needed some winter-ish.
Daniel had bought a lot of H0 building on e-bay. We set up a workshop in my basement and started repainting and weathering the houses. We used drybrushing, washes and pigments to remove the plastic feeling. 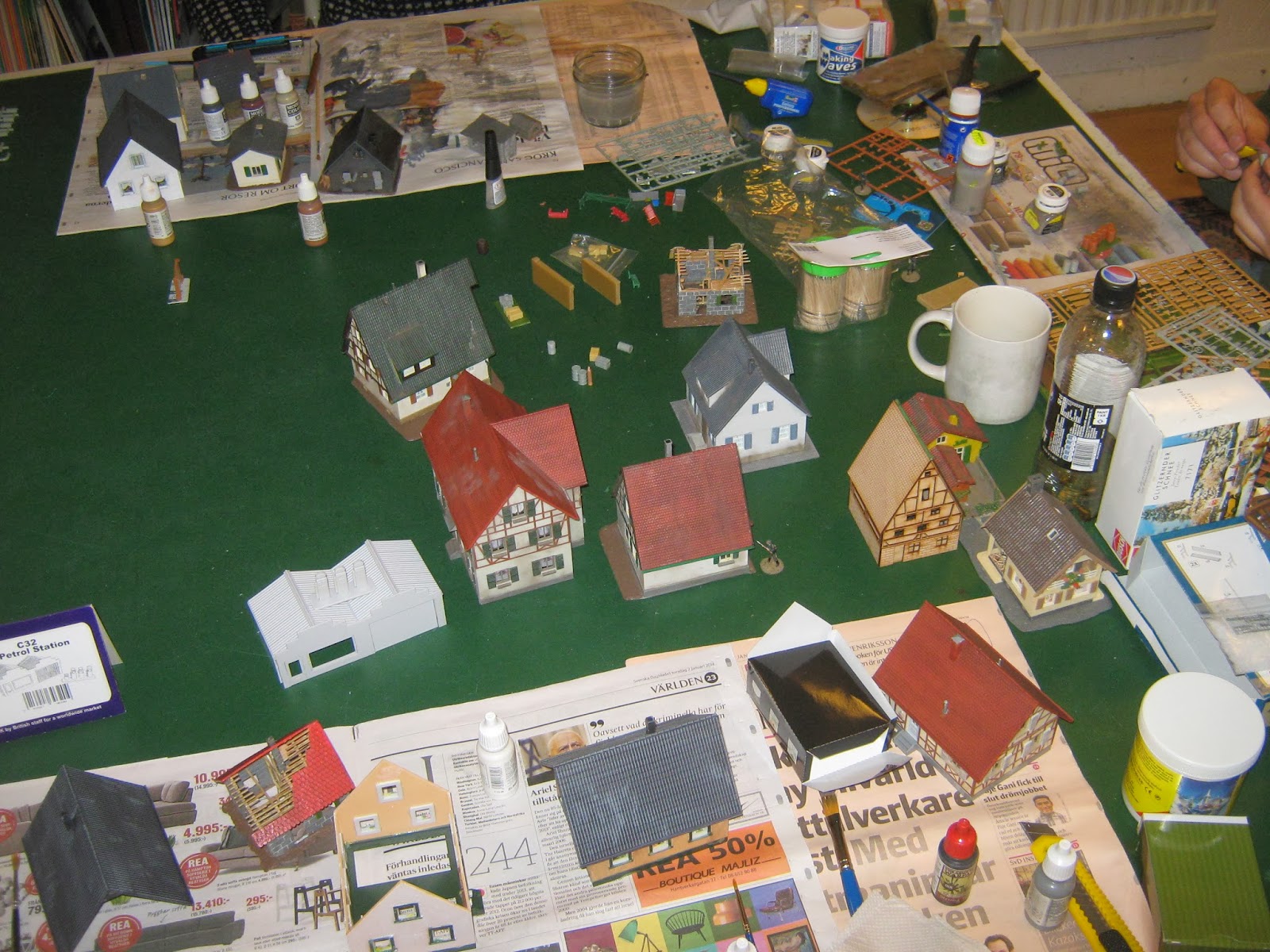 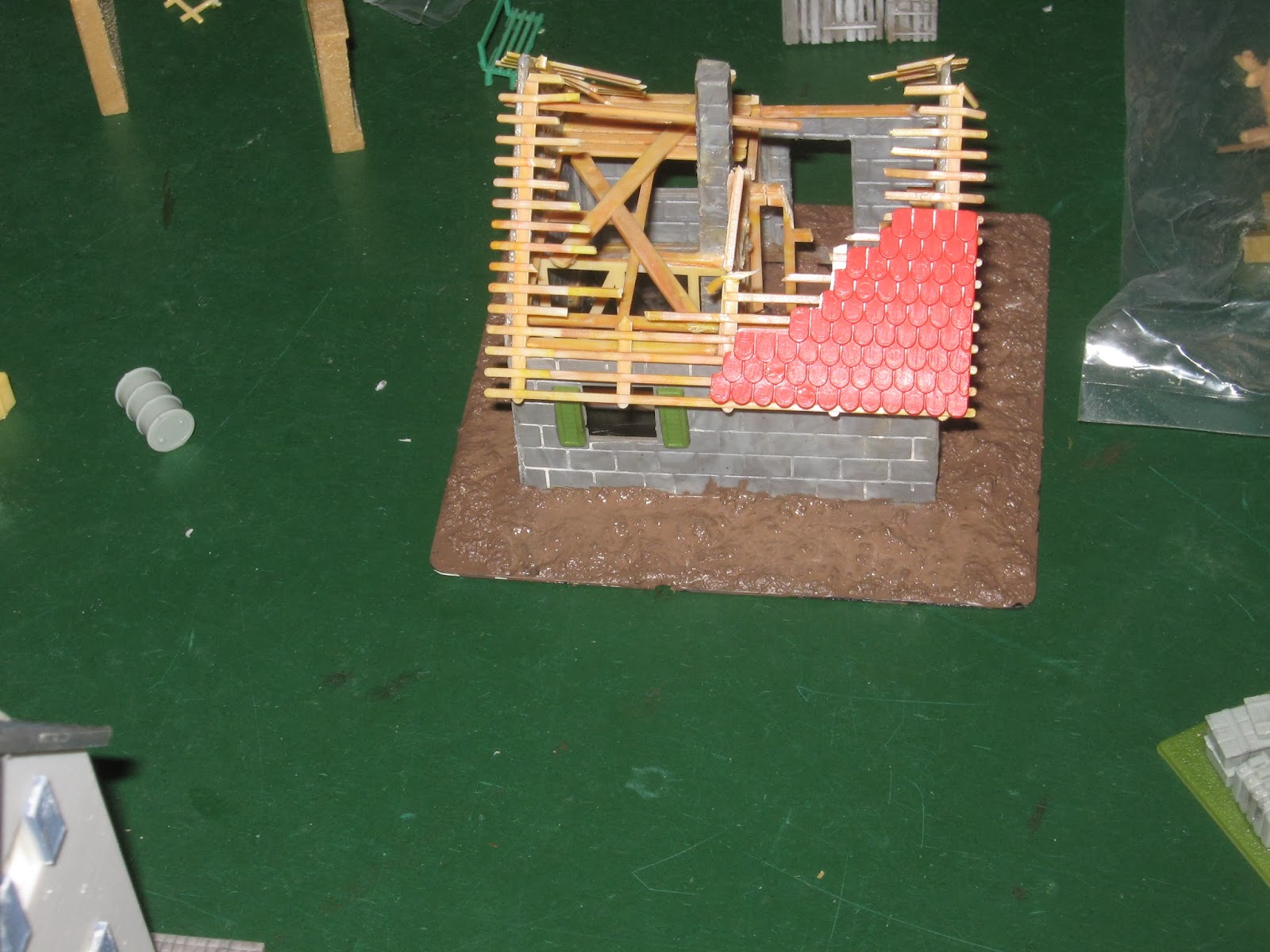 What was originally a building under construction was demolished to get a newly bombed house
Daniel mixed a secret snow-receipt (plaster, at least two different snow-effect powders, white paint and wood-glue – we essentially used what we had and mixed it. We will never be able to reproduce this…)
Sloshed it on roofs and ground. 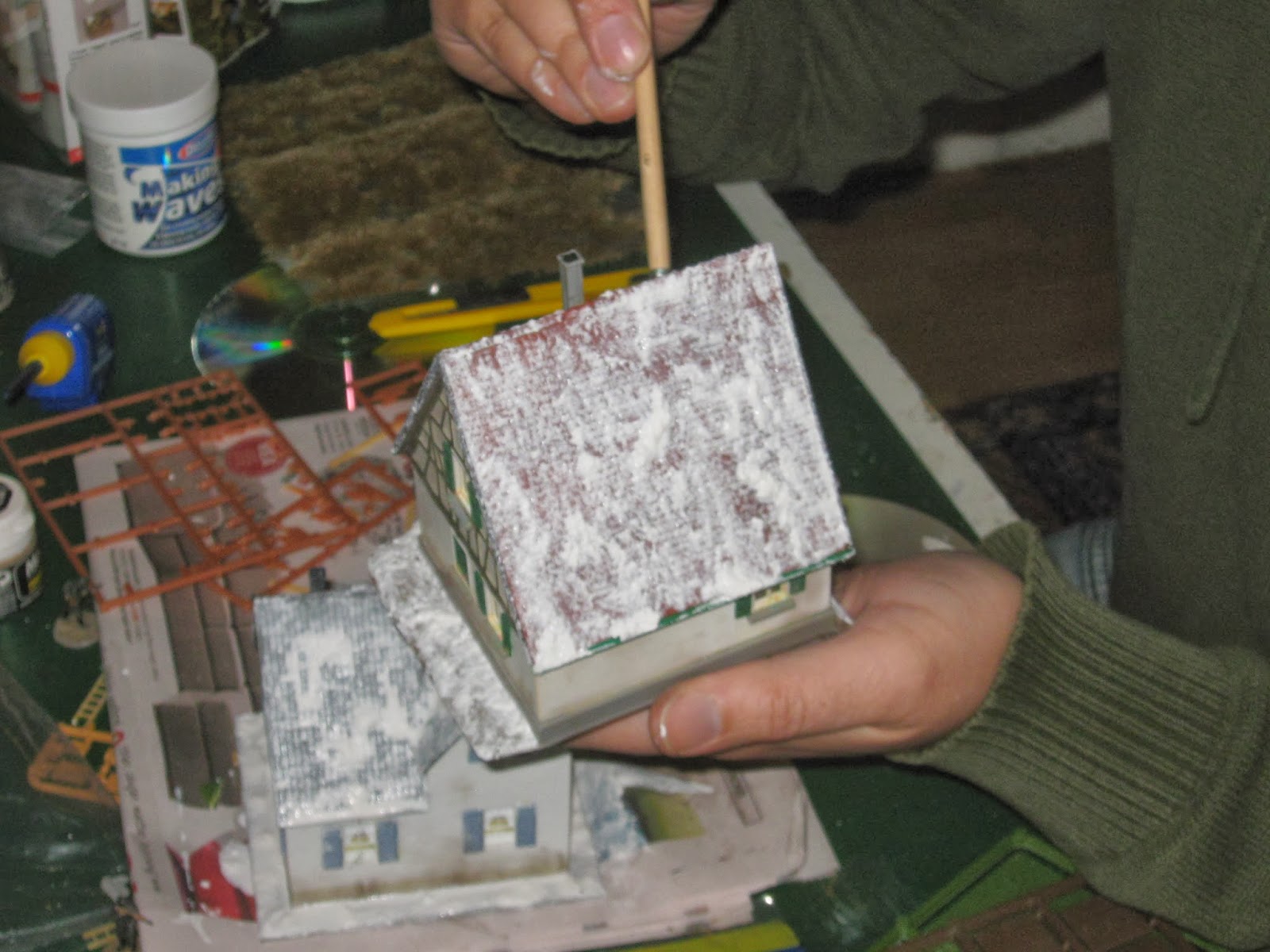 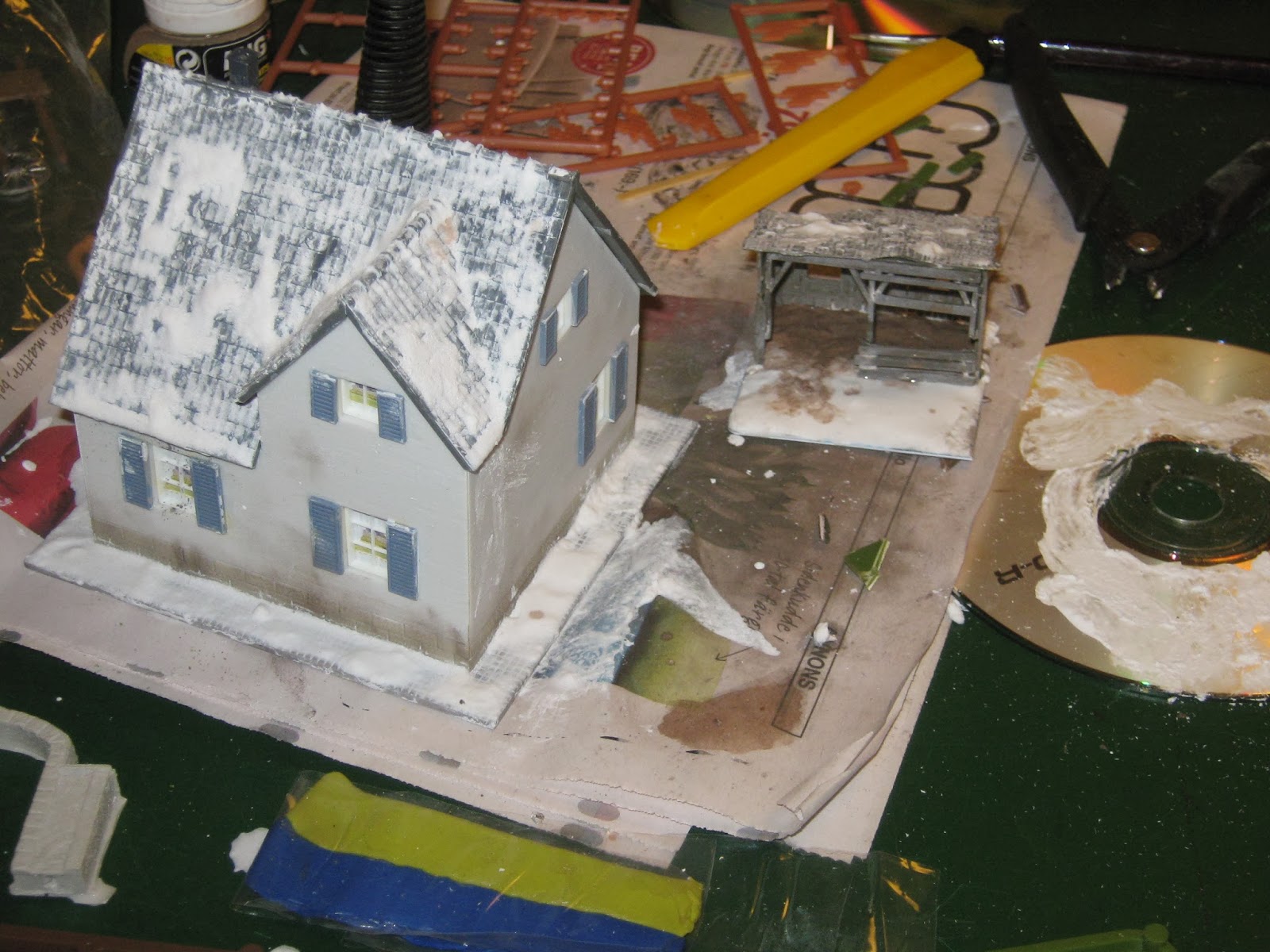 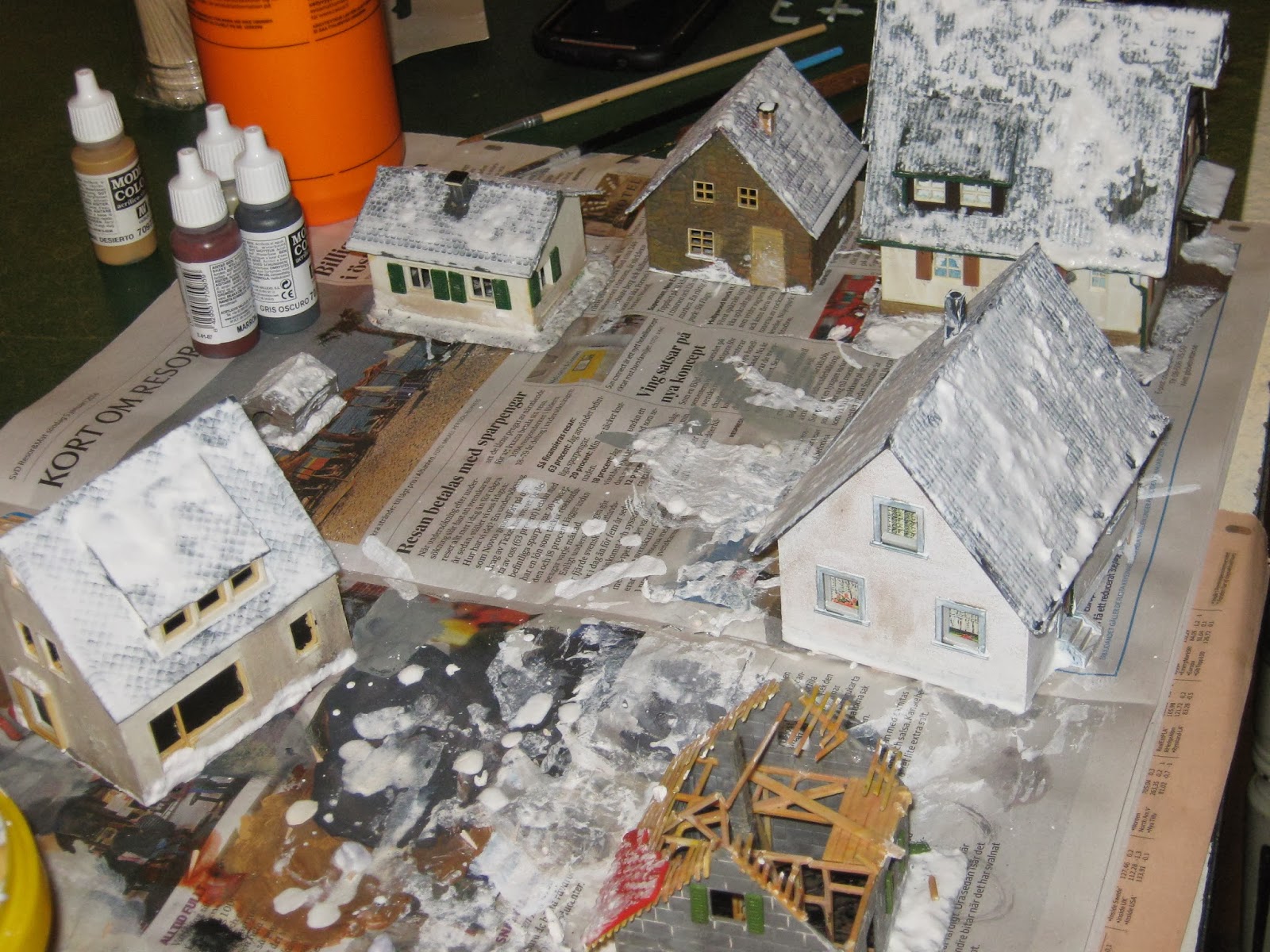 The result of a days’ not very hard work: 15 buildings ready for war. (actually, two of them need some weathering as we didn’t have time for them. That will be done by me tomorrow. 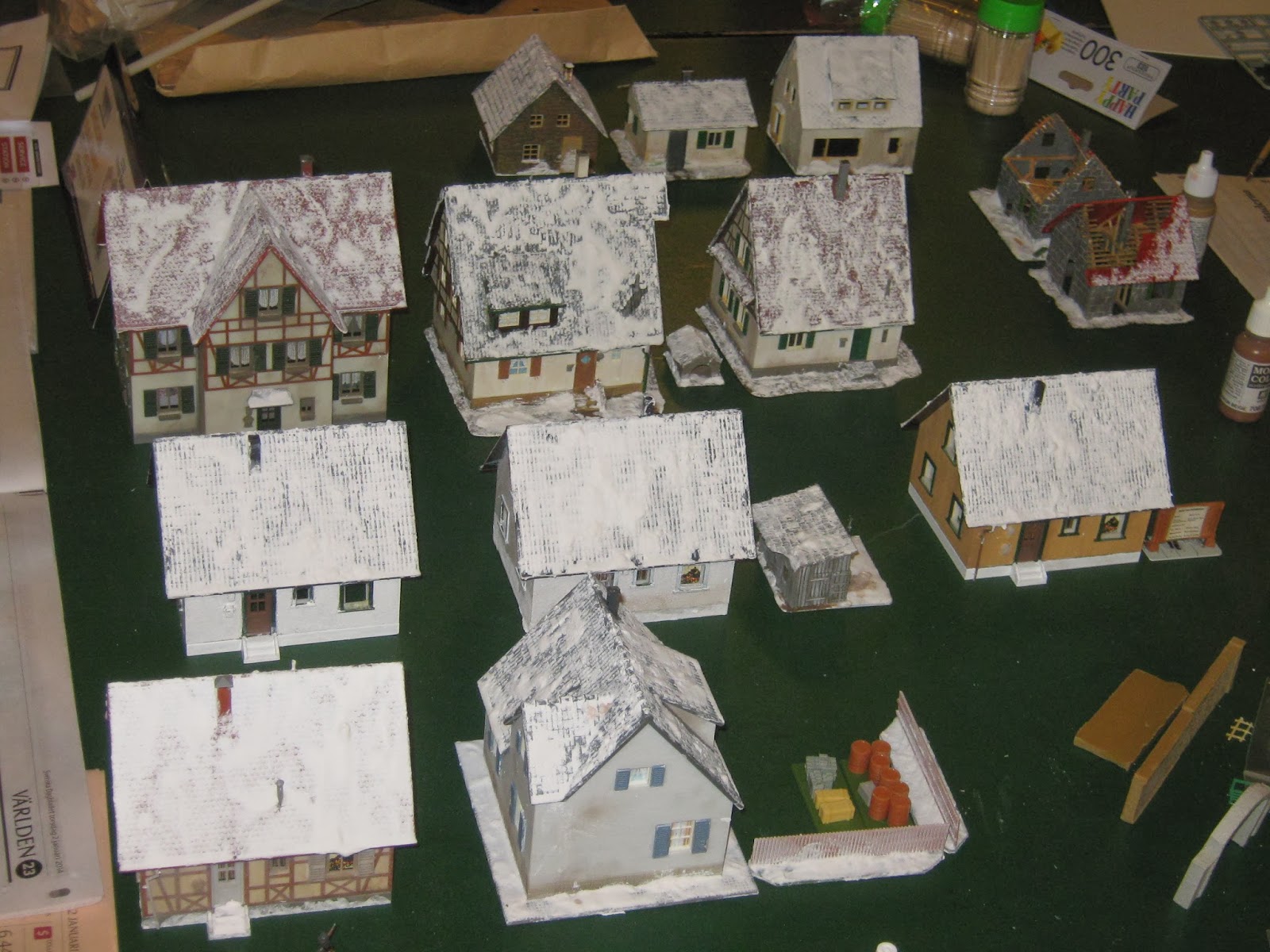 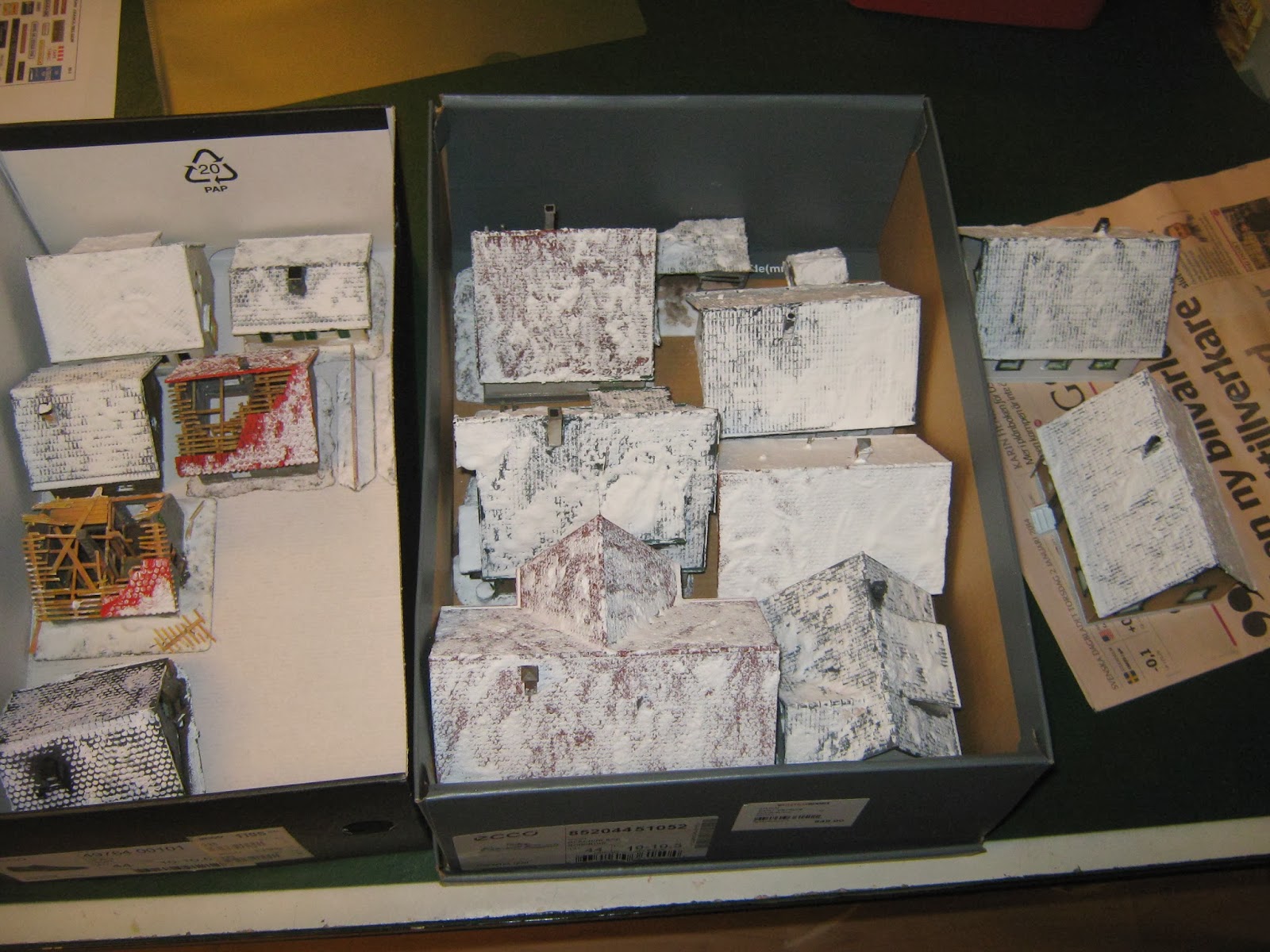 Don’t forget the Miniatures Man 50K give-away if you haven’t joined already! We are now up to 97 followers. Three to go for the 100-followers stretch goal.

Welcome
- Koen De Smedt, gaming pal, and with a somewhat infrequent blog named Ramblings of an insane mind…. that should be him, all right J
- Wargame News and Terrain, a blog I’m already following. Nice.
- russ g, I haven’t found out if you have blogs or not.
- Dartfrog with the blog Darfrog’s adventures in 6mm and such
- Sonsoftaurus, with Sons of Taurus
- Samuli Salovaara with the blog Engineered Gaming. He’s got the first box of Winter War stuff, I’m envious…he’s even had time to paint a batch – nice!
- Donogh with blogs Revelation Heights, Giyhonan Chronicles and Land War in Asia - nice.
- Sofie Vanderersmissen with Sofie’s Paint Blog and Dark Sofie’s World
- David Bromley – with (I think) Darth Brom’s Mini Minions.
- Dave Docherty with Blog-Con, A Town Named Serenity about Old West and where I’m already a follower and One Man and His Brushes.
- Mario Morrhaye with Making Miniatures with Mario.
Also welcome to Chema Sanchez, as you have no profile shots your pics disappear to the back-end of the follower queue, and I might have missed you earlier. Haven’t found any blog of yours.


If any of you do have blogs I’ve missed, then put a link in the comments below and I’ll link to them.
Posted by Joakim Ström at 08:59