The CSSS needs more recruits and these are the latest additions. 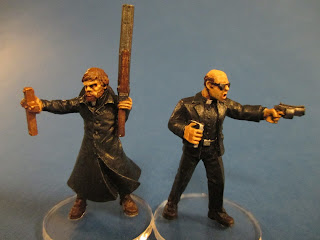 The gun-man is "Father Thomas the Vicar" from Reaper’s Chronoscope range (no 50081) and is sculpted by Tim Prow. I have not made a character of him yet in my Pulp Alley league, but he will probably be an ordinary grunt taking the place of one of the soldiers. 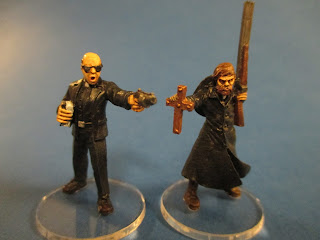 The man with a cross is from Black Scorpion Miniatures and their Tombstone Wild West range. He is one of five figs in the Tombstone 4 set and will serve in both the CSSS and in Dead Man’s Hand. In Pulp Alley he is named Padre Scuro and is an ally with the Blast ability, that is, he fires his shotgun placing a long blast template before him. That area counts as extremely perilous for the remainder of the round and should be a very efficient cultist-killer.

Padre Scuro was used in yesterday’s game in Soerabja Harbor. He was a bit nervous this time and didn’t perform overly well, but more on that in the AAR coming soon.

Welcome Katsuhiko JiNNai with The Realm of JiNNai. Lots of pulpy goodness, fantasy and more. Check it out.
Posted by Joakim Ström at 11:31