Painting early war British camouflage has given me a lot of head-ache. I have a bunch of vehicles that a painted in wrong tones, and I’ll re-paint them as soon as I figure out what colours were used. Don’t believe in the colour schemes presented in model kits!

BEF (British Expeditionary Force), fighting in France 1940 used a two-tone camouflage, that I’m on a quest to get right. To find the right colours has been easier said than done. There are many recommendations in literature and from manufacturers, but few seems to have gotten it right.
Some months ago I bought the book Warpaint part 2 that gave me a good understanding of British camouflage during the war. Unfortunately it didn’t have a good reference of the colours used. Scouring the web I found a man who seemed to know his stuff, had written some books British WWII camouflage, and who had colour references in his books!
I sent a mail to the author, Mike Starmer, he answered and I ordered his books “Vol. 1 - Desert Colours; The Caunter Scheme 1940 – 1941” and ”Vol. 4 - British Army Colours and Disruptive Colours in the United Kingdom, France and N:W Europe 1936 – 1945”, costing me £30 including P&P. Less than a week after I sent the first mail I had them in my snail-mail-box today. 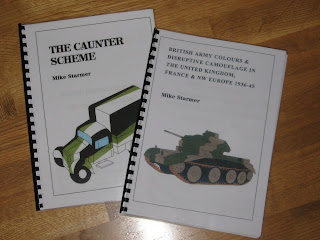