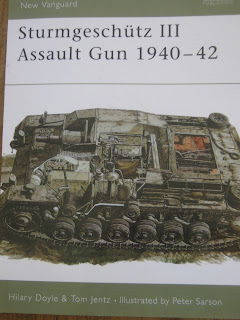 Do you want to know everything about the early StuG III? Well, you will find some things of interest here, but I’m not sure if it is enough to warrant a purchase.
The book covers the Ausf. A to E, that is, the StuG:s armed with the short 75 mm L/24 gun. The later variants, with the longer (L/43 and later L/48) 75mm anti-tank gun is missing, but the title gives that away in a sense, since the Ausf. F entered production in the spring of 42.
It begins with a rather interesting chapter on Design and Development followed by one on Product Modifications. The latter chapter specifies the differences between the different variants, and has 1:76th scale drawings of all Ausf. Sadly only one of the drawings has side, top-down, front and back views, the others only get one or two views. One problem also, is the fact that 1:76 is rather tiny when you want to study details.
After this a very short chapter on Production History, followed by one on Capabilities, mainly covering its firepower.
So far so good, but the following chapters, on Operational History and Tactical Employment were rather disappointing, as they only contain excerpts from a manual called Instructions for the employment of Sturmartillerie. Just excerpts, nothing more, no analyses, nothing. Very disappointing. To be frank, one diagram was interesting, namely one that identifies the vulnerable zones on some of the allied tanks.
The chapter Organisation starts rather well, with interesting organisation on command vehicles etc. Then comes a couple of action reports, from France and Russia, which consists of original combat reports. Here, as above, nothing more, no analyses, nothing. I expected more.
Finally, as usual in Ospreys, you’ll get some colour plates, in this case eight pages in total, where one two-page spread is a cut-away view of a StuG and its interior. The latter was very informative, the others where, well, okay.
So, all in all, I wasn’t impressed. Some of it was interesting, but I think I could find it in my private library already. Other pieces were less so. I think that the internet can supplant books like this, if they don't provide more of expert knowledge.

My rating… I’m afraid I can’t give it more than a 2 out of 5 rating. Mostly disappointing.
Posted by Joakim Ström at 18:15