The last couple of weeks have been good, or bad, depending on how you look on things.
First, I succumbed to the temptation and fell for WWII in 28mm, specifically Winter War and the Baker Company kickstarter. I blame Thomas and Laffe for this, both have started on 28mm figures, posting them on their blogs and tempting me, and Thomas especially as he went lyrical about this Kickstarter. Not my fault at all…. 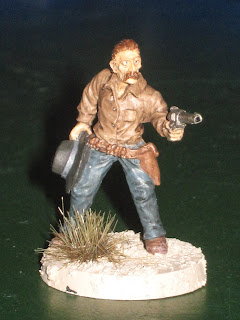 Secondly this guy….
Wild West has long been something I have wanted to try, but I have always said to myself, “Not another period”. I actually persevered for several years.
But then I bought these wagons from 4Ground, seen in a couple of posts, really nice. Could be used in the Wild West, by the way…. oh, and they have a lot of nice buildings…
Then I had those houses bought from Paul Darnell, just lying there.
And I read Henry Hyde’s The Wargaming Compendium - there were Wild West-rules in it.
And then Alphaspel had a sale, and they got some Wild West figures…
The perfect storm, and it blew me away….
So, here I am, with two new periods/scales, and a grin on my face. Ah, who cares about climbing gear for a tin and plastics mountain? 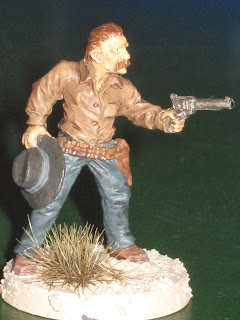 So, this guy is from Black Scorpion and their Tombstone range, the Town Watch pack. Fantastic details on these figures (actually closer to 32 mm, ‘heroic’ 28mm I guess…), and this is the first painted one, waiting for foes and a saloon.
Paints used (Vallejo unless noted):
Trousers – 964 Field Blue
Hat – Citadel Foundation Charadon Granite
Band on hat – 836 London Grey
All above washed with Army Painter Dark Tone Ink
Shirt – 874 Tan Earth
Boots and belt – Formula P3 Bootstrap Leather
Skin – 955 Flat Flesh
Hair – 984 Flat Earth
Gun, buttons and bullets in belt – 865 Oily Steel
And this was washed with Army Painter Strong Tone
Finally the shells in his belt were picked out with 58 Brassy Brass

Yep, it’s fun with a new period. Two more from the same set that I just need to give a coat of varnish.