Now, this doesn’t sound at all exciting, but the results are better than expected.
A year ago or so I bought a couple of card-building from Metcalfe, and they turned out to be perfect additions to the small town of Les Attaques in the France 1940 participation game we played at Stockholms Spelkonvent.
I have bought a couple of factory buildings, that will be used in France 1940 and -44, and Germany 1945.
I started with this one, a brewery. 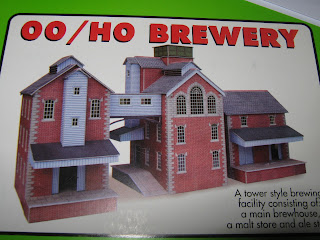 The kit comes as rather thick ready cut card, where you free the individual parts with a few short cuts with a sharp knife. 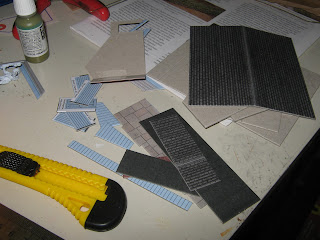 Then you use your white glue to glue it all card together, and I glue the ‘windows’ with super-glue gel (Loctite Super Attack Flex Gel). 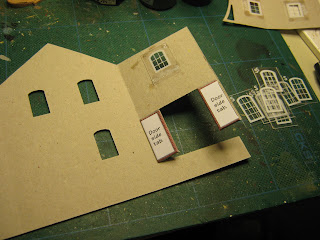 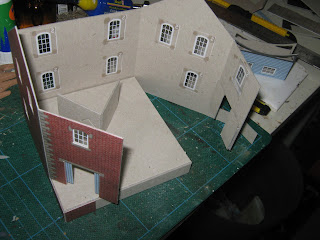 Finished in a couple of evenings, and an outstanding result. Highly recommended! 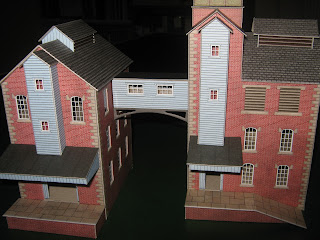 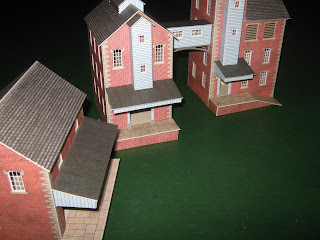 I’ve got a couple of more sets to be finished soon.
Posted by Joakim Ström at 22:14 1 comment:

The German half-track Sd.Kfz. 251 was often called Hanomag, the name of the largest producer of it. I need quite a lot of these for early war, so I essentially need the models A, B and C and the variant /1, the base-model with machine guns.

Armourfast
Armourfast has this all new 251/1 C in 1/72 scale, fastbuild and two to a box. These kits are very simple, wheels and tracks in one piece per side and overall little detail. It is fastbuild, but that can be OK when you’re about to game with them.
Some irritating details:
-The fenders have no decent pegs to make them jack into the correct position, and this is especially noticeable in the front above the front wheel. Be careful to get them in the correct position.
-The crew compartment is very basic, don’t expect driver’s seat or anything like that. The positive aspect of that is the fact that you don’t need a driver, but it will be noticeably empty in front.
-The vision slits needs to be glued in place, but be aware that they are different in front and on the sides! I didn’t do that until the glue had set on my first vehicle.
-Why on earth do they have just a MG 42 in an early half-track? They might at least have had a MG 34 as an option, but no. For these Hanomags I grab the two MG 34:s from the weapons sprue that came with Caesars 150 mm infantry gun, but every vehicle needs two machine guns, so I have to find more. Many more.
-No decals. I get registration numbers and German crosses from Skytrex decals. 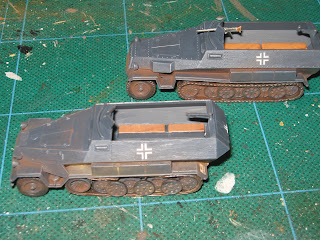 Two Hanomags, Revell in the front and Armourfast behind it.
Revell/Matchbox
I have bought four 251/1 B in 1/76 scale from Revell, and they are the same as the old Matchbox-models from my childhood. I built two of them. 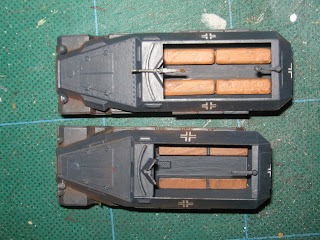 These are essentially very fine sets if you want to game with them. Decent detailing and not to many fragile pieces. Included is a machine gunner and one soldier jumping off the side of the Hanomag, and, as usual with these old Matchbox sets, a small diorama. I’ll keep the ruins for future projects.
The tracks are made of soft plastics. To get them to sag and look more natural I drill two holes slightly above the wheels on each side, apply the tracks over the ready painted and varnished wheels, and push the tracks down with a pair of pliers while I push brass rods into the holes I drilled before. A drop of super glue and some gun-metal paint on the pins, and we’re finished. 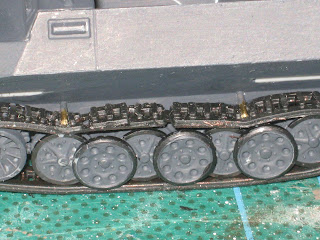 Some irritating details:
-No driver… why on earth is the driver’s seat empty? Oh well, I make a major amputation on a spare soldier and that is fixed. 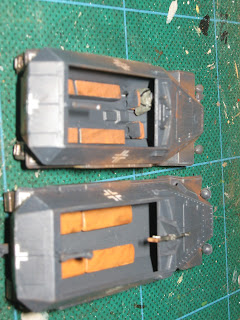 Crew compartment filled with stuff, or not.
-Wrong machine-guns again. For this model it is even more annoying as several of the versions they have decals for are earlier than the MG42. Where do I find more than ten MG34?
Conclusion: Both kits will function in a war-game. They have slightly different sizes, they are after all of different scale, but if used in different platoons I think it will be OK.
I have two more Revell kits waiting for glue and paint, and I just bought two model B from Fujimi. The Fujimi kits can be made as either /1 or /10, the platoon-commander version with a 37mm gun. I’ll be back with more information on them.
I found the Fujimi kits at Hobbybokhandlen on Pipersgatan, Kungsholmen, Stockholm. An excellent shop if you’re interested in militaria. They've got model kits, paints, books etc.
Bromma Hobby is the place where I bought the Armourfast kits, and they have stuff from a lot of other brands, such as Caesar, Pegasus, The Plastic Soldier Company and more.
News June 2011: I read that The Plastics Soldier Company will release a kit with early 251/1:s. It’s a must buy for me.

There are not that many producers of these early models, but far more of the later model D.
My goal is to get eight 251/1 and maybe one 251/10, the command-model armed with a 37mm gun.
Posted by Joakim Ström at 22:10 4 comments:

I had a bocage-building spree before last week-ends’ game, and this time I used hamster bedding as leaves.
I bought hamster bedding, that is wood shavings, in the local pet-shop. Far too much bedding, I might add, as you won’t need all that much. I mixed bedding, water and olive-green textile pigment in a steel bucket and let it stand for two days, mixing now and then. I let surplus water drip off and tipped the bedding onto a couple of newspapers, to let it dry a couple of days, until dry.
I followed the instruction in the article in Battlegames. Result: Epic Fail! The shavings were far to big, which I should have been able to figure out immediately. Into the waste basket.
The box with enormous leaves moved to the kitchen and food processor (Note: No wife should be present at this stage. That is also applicable to girlfriends/mothers etc). After some experimentation the “leaves” were in a decent size. 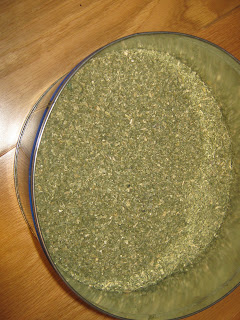 Lots and lots of leaves!


Next try was also according to the article. I dipped some rubberized horse-hair in diluted green paint, and dipped that into the hamster bedding. That went directly to the waste basket.
A new try, now I brushed diluted white glue onto the horse-hair and dipped it in bedding. 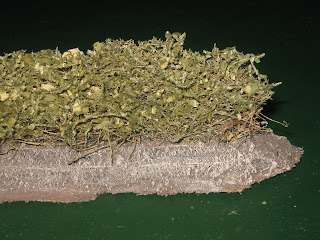 
After that the assembly line started, and I got 15 lengths of bocage, sprayed with GW Purity Seal to fix the greenery.
They looked great on the gaming table and effectively stopped my American armour and infantry. 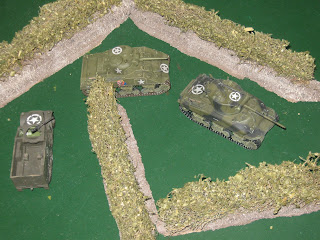 I will make much more bocage in the future, including sections flattened by tanks or blown up, gates, sections with trees etc.

My prior adventures here.
Posted by Joakim Ström at 19:58 No comments: