We’re still playing our Perilous Island campaign for Pulp Alley. Next adventure in the campaign-book is the one set in Soerabaja harbour, but before that we wanted to test the vehicle rules found in the Pulp Gadgets, Guns & Vehicles supplement. We still wanted a scenario tied to our campaign, so I wrote Mad Pulp Max (I’ll do a more detailed write up of the scenario on the Pulp Alley Forum soon)

Our heroes of the CSSS have just gotten clues to the whereabouts of Professor Darrow so they are off to the Dutch East Indies. The best way is with aeroplane from Ankara and the best way from Istanbul to Ankara is by car or truck through the Turkish highlands.
Our heroes are travelling through the steep-sided valleys when they suddenly emerge on a wider plains and from that plains only one narrow valley remains before Ankara. Life is good. The sun is shining. No hurry. Relaxed small talk in the cars.
Until two dust clouds are spotted. A check through the binoculars and it is clear that two of the other leagues have had the same idea. And they have all spotted our heroes.
The quiet of the serene plains is scattered with the roar of engines.
The race to Ankara has begun and the gloves are off.
This time the Phrenologists had made a wrong turn and didn't show up, unfortunately.

The rules in short:
- The goal is to get as many league-members as possible through the valley.
- At the end of the game all members on the last 2'x2' board are deemed to be in Ankara and all leagues will be tasked with the same peril that they must pass. The league that passes with the most dice is deemed the winner.
- The terrain is rolling, that is, at the end of the turn when at least one car is fully on the farthest terrain-segment (the one farthest into the valley, closest to Ankara) the last segment (closest to Istanbul) is removed and placed in the front. Anything still on that board is emoved from play.
- Every league gets up to 6 points to buy cars/trucks from. No armour or armaments allowed.

That ended the adventure. The Good Side, that is the CSSS, had Souroa, Soldato Morto and one Belgian on the last board whiles both the Belgians and the Cult of Ra only had their leaders there.
We rolled for victory and the CSSS got their well-deserved victory!
Our heroes celebrated their stunning triumph in Ankara. In their midst was a very frightened Belgian who didn’t understand a word of Italian.

A big welcome to Frank O’Donnell with If it wasn’t for ones covering Pulp Alley and other fun stuff. Check it out.
Posted by Joakim Ström at 11:25 22 comments: 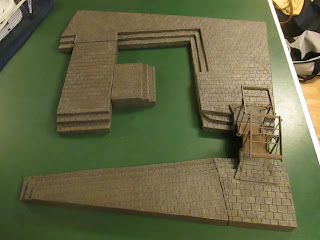 I wanted the harbour to be a bit more crowded and also to be more flexible, i.e., give more re-playability. So I cut, scribed, ‘stoned’ and painted two more pier-pieces - the long and thin piece and also the short pier. 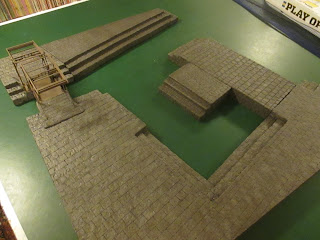 The short piece is really useful as I can place in different places. 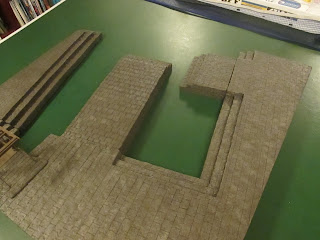 Now I’m really pleased with the ground-work. The only thing I wan't to do long term is a couple of shorter half-height piers and maybe a rickety wooden jetty.
Just two more boats to go and then we will see action. 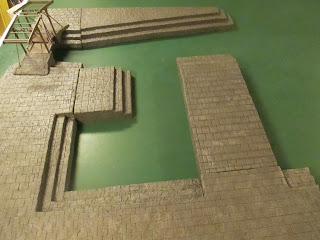 If you want to see more on the Soerabaja progress and how these piers are done then follow this thread.
Posted by Joakim Ström at 09:48 14 comments: 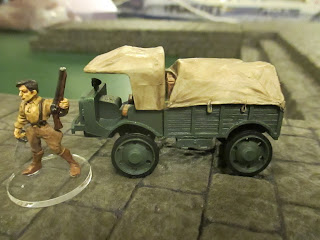 I bought this little Italian WWII truck from Perry Miniatures for my pulp games. I was drawn to it because of its looks. It is just so ugly it’s cute J
I think it will fit superbly in all these out of the ordinary settings we find in our Pulp Alley games. In the middle of nowhere they have this truck nobody wanted…
It’s missing its steering wheel at the moment, but I’ll mount that shortly. It disappeared and I just found it in a box. 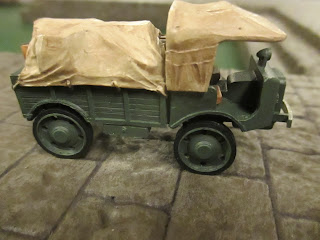 Welcome Tilioch from the Club, with Late Night Painting, where you will find everything between ancients and the far (grim) future. Well worth a look.
Posted by Joakim Ström at 20:46 17 comments: 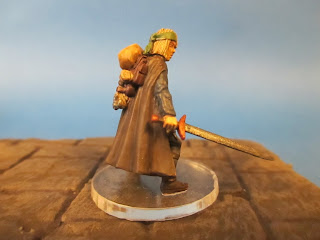 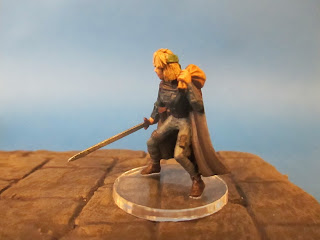 An excellent sculpt from their Adventurers range, and I especially like the fact that she is dressed for the job and well equipped with suitable adventuring gear. 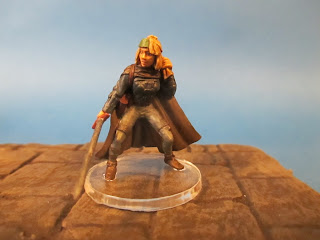 Another great mini from Otherworld.
Posted by Joakim Ström at 09:47 12 comments:

We had a club meeting the other day and with the formalities quickly done the fun began. There’s a new campaign in the club, The Great Northern War and specifically the Swedish campaign in Russia 1708-1709.
This was the first battle of the campaign – the Battle of Holowczyn where the Swedish forces surprised the Russian army in camp.
The participants of the campaign have their own unit and seek the most glory for them (and I guess all will be for nothing when they reach Poltava…).
The rules are Black Powder and The Last Argument of Kings supplement.
I was happy to just sit and watch the match. I have no units and don’t intend to be part of the campaign. Just enjoy the beautiful figures. I relaxed.
And then someone said “Hey, Joakim, you don’t have a unit, do you? You’re the General!”
What! I don’t know the rules. I don’t know the units. I’m not very good on what tactics were used. I simply know nothing.
“Excellent”, they said. “You probably inherited your post, anyway.” “And you’re nobility, and they are all inbred.”
I was defeated even before the game began.
I have a very vague recollection of which unit was which. ("Well, they are peasants, all of them, so who cares! Pretty flags, though.")
We better let the General lead us through the battle. I think he can guide us through his strategic and tactical considerations.
Over to you, Sir.
We have to interupt while the General sorties the field. The troops before him died and splattered him with blood and gore. His uniform looked a mess and he really had to get a change.
He will make the rest of the comments from the tailors tent.

I think we leave the general now. He has some very pressing decisions before him.

More on this battle by another member of the club:
http://wargameinsvergie.blogspot.se/2015/09/gnw-campaign-game.html


He actually had a unit and did rather well, the sneaky…
Posted by Joakim Ström at 14:26 18 comments: