Are you alone? No one to play with? Or no one who wants to play as often as you do?
Then Platoon Forward, from Too Fat Lardies, might be something for you.
Platoon Forward is a campaign system for solo gaming and can be used with TW&T, IABSM and Chain of Command (forthcoming WWII rules that the group is play-testing) and other rules too. Suitable for WWII and other conflicts from the thirties and forward until Vietnam or so.
I bought the rules the other day, I’ve read them trough and they seem interesting and very useable.

A short summary:
- You handle the leaders of a platoon, from platoon-leader and down to squad-leader, in a role-playing light version. They will have abilities that influences how they behave in battle and between missions.
- The rules handle the missions, making them varied and unanticipated.
-Some things happen between missions, for example interaction with NPC:s, unforeseen happenings in the platoon etc.


My first impression is very favourable, and I will certainly try the rules. It will probably be the adventures of a German platoon I France 1940.

In a couple of weeks the gaming group will build a game-board portraying Normandie in 1944. Rumours says that American Shermans will meet Germans. Probably hit by Germans…
So, what is so special about Normandie? The answer: Bocage, that is some smallish pieces of pasture surrounded by high hedges, making life miserable for the attacker.


We need lots of bocage!
In the excellent magazine Battlegames, number 21, there is an article about how to build bocage. I made an inventory of what I had at home, and modified the process to suit my needs.
First of all I sawed bases from 3 mm fibreboard, 20-30 cm long and a couple of cm wide. With my sharp hobby knife I cut into the sides giving them an uneven form, and about 45 degree slope. To build up the bases I used foamboard (bought at Kreatima in Stockholm) cut into strips as long as the bases and slightly less wide. Here I have glued two 5mm thick strips onto the fibreboard base. 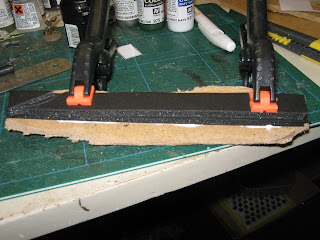 When the glue is dry I form these bases by cutting into them, giving them an uneven texture and a suitable cross section.
Time for painting. I made a batch of my ordinary ground colour, mixing dark brown paint (from Flügger, in a handy ½ litre samples pot) with sand from the beach (some different sizes, mixed with some debris). I have so much sand that I get a very thick mix, and smear a lot of it onto the bases, in several layers, to get structure. When dry I dry brush with a beige paint. 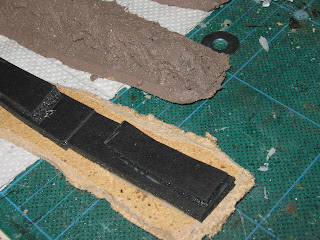 Now to the hedge!
A while ago I bought a roll of one inch thick rubberised horse hair from JA Milton Upholstery in UK. The postage killed me, but at last I had this mythical material in my hands. 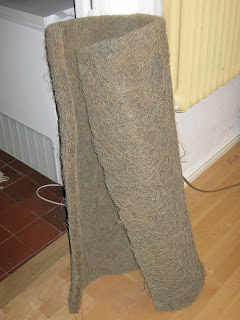 It is what it sounds like, and is excellent for making trees and hedges. 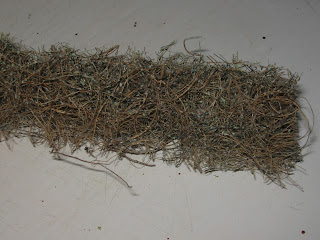 I start by cutting some uneven lengths. The roll is far too thick, so I rip it apart in the middle, which works very well. After that I cut it in length to suit the bases, and I go over the lengths with a pair of scissors, to get uneven edges.
In the original article they used hamster bedding, but I don’t have that available. Instead I try with a mixture of materials from Noch and Woodland Scenics (turf, clump foliage etc) mixed in a can to get something that looks as a mixture of leaves from all sorts of different shrubbery.
I sprayed my hedges with adhesive from Noch and dipped them in the mixture.
When dry I spray with GW Purity Seal to fix everything in place, and then I glue the hedges to the bases with my glue gun. 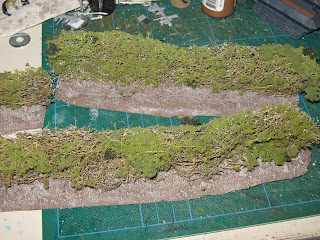 I’m rather happy with the result.
Now for some hamster bedding.

My further adventures here.
Posted by Joakim Ström at 20:55 3 comments:

The first real project of this year. (I’m not counting the nearly 100 28mm figures that I cleaned, pinned and glued together in January as a project. But they are the start of the project of painting through the tin and plastic mountain, the first step is putting everything together. I’m not even finished with that yet.)
I’ve had two 75mm infantry guns from Pegasus lying half-finished on the work-table for quite a long time. And now I just happened (cough; cough) to buy Caesars’ 150mm infantry gun.
I started by gluing all guns together. The Pegasus sets were rather fiddly, but Caesars’ were more optimized towards war-gaming and finished rather quickly. 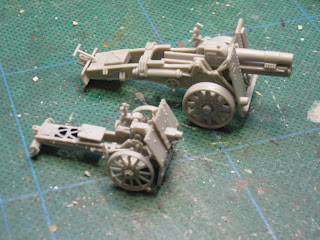 I’m mostly modeling early WWII, primarily France 1940, so all the guns were painted panzer grey. Dry-brushed in a lighter grey, and a coat of matte varnish.
I bought some Vallejo pigments the other day. I’ve never tried this before, and these guns were as god test subjects as any. I brushed some on, and I’m rather satisfied with the result. (My competence when it comes to photography isn’t the best, the flash makes everything look quite gloss, which it really isn’t in natural lighting.)

Now to the figures

The Pegasus sets have 2x4 figures. On one hand early infantry and on the other SS in camouflage smocks and I chose the early infantry. The figures are made of softer plastics, and they are multi-part. I glued them with cyano-acrylate glue. Bases were 18mm spacers.

I started by painting them with slightly diluted white glue, to get a surface that holds the paint. When that was dry I gave them a base of white paint, and then a black wash. In this way I get the best of two worlds, a rather light base-color that makes the colors brighter, and black in all nooks and crevices, giving a natural shading and I also avoid white spots if the paint doesn’t cover well in a crevice. As a bonus I’ll also get a first warning of flash or other uneven spots I might have missed in cleaning the figures. 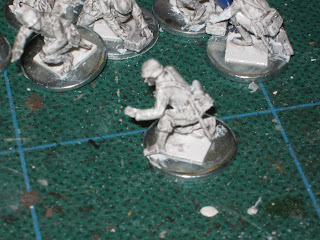 The box from Caesar contained 8 figures in hard plastics and a lot of fiddly parts. Every figure is made up of body + leg + leg + arm + arm + head + helmet + equipment in many parts. I got a bit nervous about putting them together, but it went surprisingly well and the level of detail is outstanding. As a bouns you’ll get a lot of extra weapons and heads. A lot! This set is worth its price just for that.

Painting. I started with all dark details: smock, gas mask canister and cup for the water-bottle Vallejo 830 German Field Grey, Trousers: V 836 London Grey, helmet: V 869 Basalt Grey, webbing and other leather stuff: Black. All this was given a black wash.
After that the light details: Haversack V 912 Tan Yellow, shaft for the shovel: V 843 Cork Brown, bottle: P3 Bootstrap Leather, Flesh: Vallejo Light Flesh and a wash over all this with GW Devlan Mud.
The collars were painted with V 975 Military Green, and insignia white.

The bases were then painted with a mix of chocolate brown paint and fine sand, and covered with static grass. 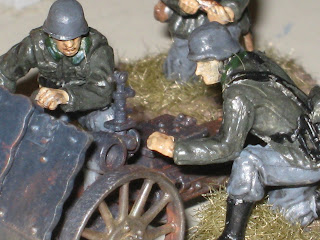 In the games from  Too Fat Lardies, the infantry guns ahve five-man crews, so with the men from the boxes I get three fully manned guns, and a bonus figure. 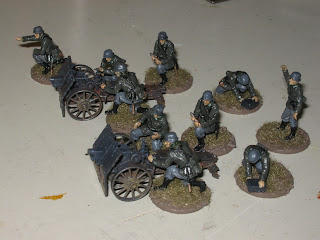 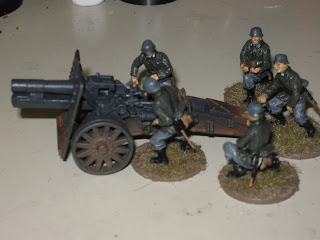