We’re soon off to the next con, this time FlemCon 2, where the adventures from Stockholm Spelkonvent will continue in a participation game. Another day in the push against Minsk, in the early days of Operation Barbarossa.
If you happen to be around, do come and say hello!
I’ve been checking the tin- and plastics mountain, to see what I already have that could be suitable for this game. I found two boxes of Pz IV F1, one Airfix in 1/76, and the other a Hasegawa one in 1/72. I already have a finished Hasegawa, which played an important role in the last game.
When the first two models were nearly finished I stumbled upon the new 1/72 kit from Plastics Soldier Company! 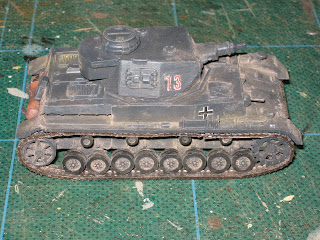 The Airfix model – those wheels do sit tight and awful tracks
Airfix – you can build two variants, either with a short 75mm gun, or with a long one, presumably variants F1 and F2.
+: Um, ehr…. I already had it, so it was free…. sort of
-: It’s a very old model, and you feel it. The details seem to be a mish-mash of different marks, and they aren’t very crisp either. The wheels do sit very tight together. It’s a bitch to glue the hull together. Tracks made of soft plastics.
All in all, not a model I can recommend. That was too kind - stay away from it. 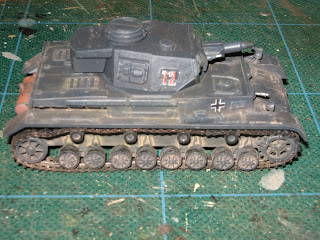 Hasegawa – sagging tracks
Hasegawa – here you buy the different marks in different boxes. This is the F1-model.
+: It went together very well, crisp detailing. The end-result looks correct.
-: The placement of some details were rather unspecific, I had to check my literature, and of course blew it in (at least) one place (the commanders hatch was placed off-centre, even though I checked it (an obvious curse, probably by the Russian players)).
About the same number of pieces as the Airfix model. Also here we see tracks made of soft plastics, but they get a decent sag by built in pegs (if painted black they are nearly invisible), pushing the tracks down, see photo above. Nice! Everything is better than individual links, so I won’t complain in this case.
A nice kit, all in all a good buy if you’re a modeller, and a bit less so if you’re a gamer and want lots of tanks quickly. 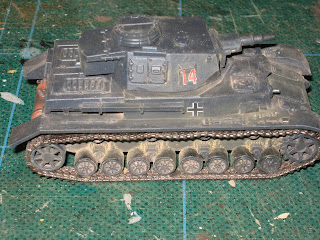 Plastic Soldier Company- a wargamers dream
Three panzers in one box, and you can choose between variants F1, F2/G and H.
+: Nice price. Few pieces, very easy to build. Tracks of hard plastics.
-: Some of the details are rather rudimentary. No decals.
I built one of the three tanks in this box in a very short time. It is a wargamers model – no small details that will break during play, I mean gaming, and so easy to build.
Highly recommended if you’re a gamer, not so much if you want a detailed model. It that case the Hasegawa one is better.

All three are painted with Vallejo German Grey, drybrushed with basalt grey. Decals from Skytrex and Aleran.
Dirtied with Vallejo and MIG pigments, and a final coat of matte varnish spray.
I will probably use all the tanks, but the Airfix one will be in the back… 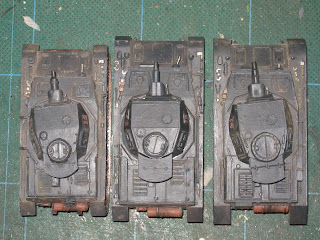 A comparison from above – Airfix, Hasegawa and PSC. The Airfix kit is noticeably smaller, being 1/76 scale. 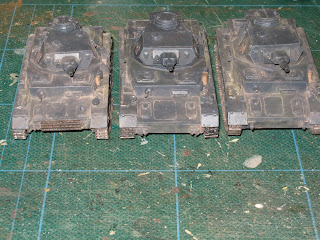 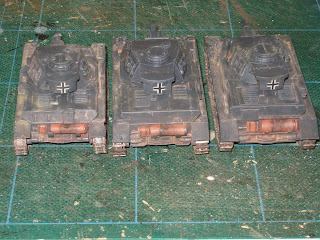 Back
I will use these as generic short-barreled Pz IV in both France 1940 and Russia 41-42. Yes, I know, it is heresy.
My effort to lower the tin- and plastics mountain failed, got rid of two kits, and got two more unbuilt tanks... again... at least the mountain isn't bigger....

Look here if you're interested in a later article comparing the PSC Pz IV Ausf F1 to Armourfast Ausf D.
Posted by Joakim Ström at 22:30 5 comments:

More 6mm vehicles for the glorious Italian army. These are Heroics & Ros and descent quality for a low price (40p a piece). 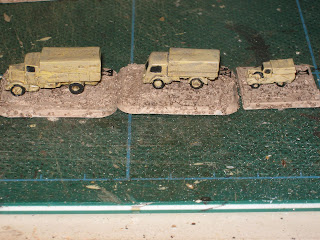 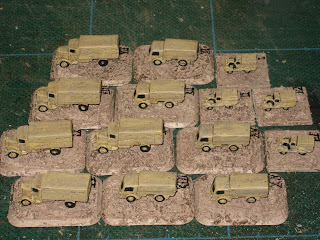 I try to interest my kids in my hobbies, and the one to embrace painting is my daughter, now 7 years old. She still needs a bit of help, but has turned out to have quite some talent. 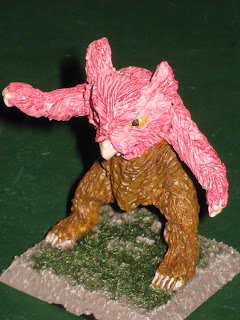 This owlbear (I don’t know the make, maybe Black Tree Design?) was found deep down in the tin-mountain, and it would probably never be painted, as I had already painted a really nice one from the Chainmail game.
She got it more than a year ago and I was somewhat panicked when she said she wanted it painted in pink… Probably a female :-) Pink with a red wash and brown with Devlan Mud was actually turned out to be rather Ok. I helped her with claws, beak and eyes. It will probably see action against her party in our D&D campaign.
Not bad for a 6-year old! She is very proud of it and really wanted it on my blog.
Posted by Joakim Ström at 21:35 6 comments:

Familiars are a wizard’s best friend, and in my D&D campaigns physical representations of familiars have been sorely missing.
Not for much longer. I bought a couple of packs of Reaper familiars to rectify this, and found this and that in the tin- and plastics-mountain. 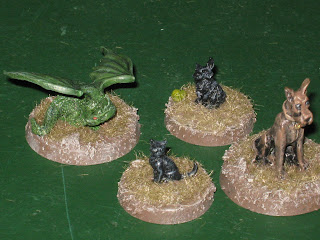 The first two were very simple paint-jobs. Rabbit and cat from Reaper were painted black, with a very light grey drybrush. Done in a moment. Not much, but they are better than nothing, and anyway a do believe the rabbit will see very limited use anyway.
The small dragon was base coated with Vallejo 968 Flat Green, a black wash, drybrushed 833 German Camouflage Bright Green and a light drybrush of 885 Pastel Green. Eyes red with yellow pupils.
The dog came from Hasslefree, and their range of teenage monster-hunters or whatever. I think he is originally from Armorcast and was retailed for some time through Hasslefree. He is painted black, with a chocolate brown (I think) drybrush followed by a very light drybrush of Vallejo 955 Flat Flesh. 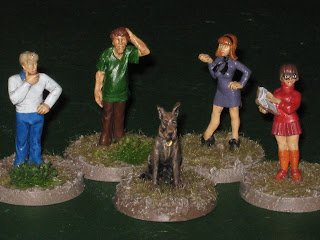 Here we see him together with the gang from Hasslefree I painted last year. I think you can make out what gang…
Posted by Joakim Ström at 17:24 1 comment: 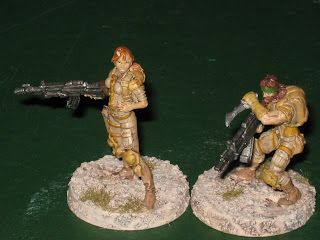 Two Ghulam Infantry
I’ve been salivating over the Infinity figures for quite some time, but another period/rules set… I read the basic rules (free download!) and they seemed decent. Anyway, I plunged into Infinity this summer, bought the basic rules, and was wowed. Really nice fluff, beautiful rulesbook, and decent rules. As it happened, I also bought two starter sets, Haqqislam and Aleph. Haqqislam was a must, I really like the feel of that faction. Aleph – well, I’m not really sure about them, we’ll see.
Anyway, all figures are outstanding when it comes to detailing, and if you want to spend ages on all the tiny details, then you can certainly do that. My intention was to get the figures on the table in a manageable time, but still have nice figures.
Let’s see how it turned out.
Haqqislam – I wanted a desert themed look for these figures, a lot of sand, beige etc. The starter set comes with six figures. Three Ghulam infantry – the basic grunts, a Hunzakut sniper, a Naffatun with rifle and light flamethrower, and an elite Janissaire.
The Ghulam Infantry and Hunzakut sniper 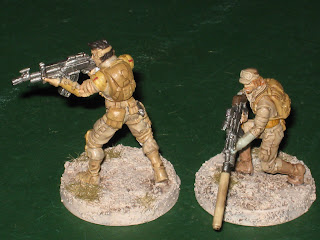 Ghulam and Hunzakut sniper
Clothing – Vallejo 819 Iraqui Sand. Armour 913 Yellow Ochre or 835 Pastel Green. Shoes and belt 912 Tan Yellow on one figure, but it was a bit too light, so I changed it to Shoes and holster 843 Cork Brown, belt 856 Ochre Brown. Backpack 977 Desert Yellow. Rifle 954 Gun Metal and shoulder stock 941 Burn Umber.
The figures were then given a wash of Devlan Mud, and the weapons had a black wash. 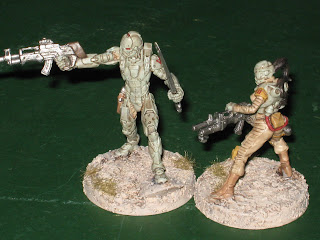 Janissaire and Naffatun
The Janissaire was the easiest. Armour 835 Pastel Green with clothing Iraqui Sand. Washes as above.
The Naffatun was a combination of the Ghulam and Janissaire colours.
Then off course details; hair, eyes, bandanas, grades etc. I used about 20 different paints for the Ghulams…
All in all I'm very satisfied with the quality of the figures, they really take the washes extremely well.
There will be more Haqqislam.
Posted by Joakim Ström at 22:35 5 comments: 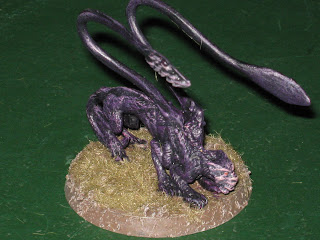 I bought this model ages ago, at a sale. Actually quite a find, as displacer beasts are rather rare creatures, at least in tin or plastic.
The kit, made by WotC, was in two pieces, a left and a right half, and the fit was rather poor, so a lot of green stuff was needed. I painted it black, a heavy drybrush of Citadel Liche Purple, and a lighter one of Vallejo 944 Old Rose. The face got a final light drybrush of 955 Flat Flesh. Eyes Red with yellow pupils, and teeth Ivory.
One of those models that has been on the painting table for ages. I’ve tried out a couple of ways to paint it, and this was the least bad…
Posted by Joakim Ström at 21:48 No comments:

The new IABSM is here! (Soon)

I just ordered I Ain't Been Shot Mum v3. The new version is here at last. In hardback (or PDF) AND pretty colour-pictures!

I'm sooooo looking forward to the parcel arriving next week.

This book is about the Finnish assault gun battalion in action during WWII. The title of the original book is Laguksen rynnäkkötykit – Rynnäkkötykkipataljoona 1943-44, written by Erkii Käkelä.  My version is in Swedish, from 2006, and called Lagus stormkanoner – stormkanonbataljonen i strid 1943-44, ISBN 951-50-1560-X. 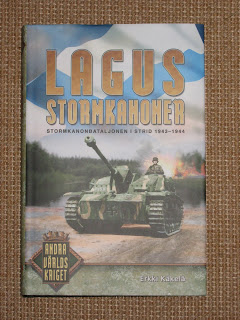 In 1943 the Finns constructed the BT-42 assault gun. It was based on captured Russian BT-7:s, with a British 114 mm howitzer of WWI vintage in a locally made turret. 18 were made and they first saw action in late 1943. They were moderately effective against pillboxes but totally inefficient against tanks.
At about the same time the Finns bought a number of StuG III G:s from Germany. These first saw action in June 1944, and then fought continuously until cease-fire in September 44.
This book is a detailed account of this battalion, how the assault guns were acquired, the training etc.  And for us wargamers, the most interesting bit is the very detailed descriptions of the fights of this unit. As a testament to their skill, they killed 87 enemy tanks, at the cost of 8 of their own.
My gaming group has played a bit of Winter War, i.e. the war between Russia and Finland in 1939-40, and with this book we  will get a lot of detailed scenario-ideas for the Continuation War.
Recommended if you’re interested in this rather odd topic, and highly recommended if you would like to see these guns in action on the table-top.
How about Lagus then? Well, he was their commander
Posted by Joakim Ström at 21:47 No comments: