The dwarven fleet gets bigger and bigger, and they need opposition. Elves! 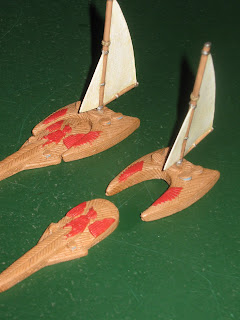 They were painted with Vallejo 843 Cork Brown, and given a wash of Gryphonne Sepia. The sales got a base-coat of 919 Foundation White, then Humbrol 103 Cream and drybrushed white. The Ornamentation was painted 908 Carmine Red with a wash of Baal Red. ‘Gun’ports were Ice Blue with a wash of Asurmen Blue. 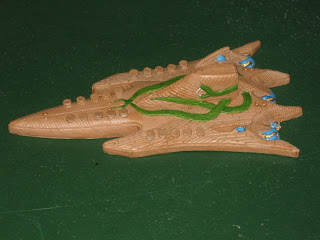 As above, but ornamentation 967 Olive Green with two washes of Thraka Green.


The energy orbs were painted as the gun ports, but with highlights of Ice Blue, and then a layer of gloss varnish. Fittings were Vallejo Game Color 56 Glorious Gold. 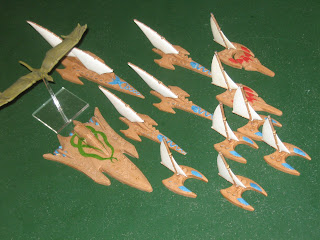 The whole fleet so far
Posted by Joakim Ström at 17:56 No comments:

The Rats of Tobruk

A couple of weeks ago the gaming group met in my basement for a game of I Ain’t Been Shot Mum (IABSM), produced by Too Fat Lardies (TFL). An excellent set of rules for company-level WWII-battles. A PDF-bargain at £7.This time we were outside Tobruk, playing the scenario “Rats of Tobruk” from Too Fat Lardies' 2006 Summer Special (The Specials comes out twice a year, and are filled with information and scenarios for TFL:s games, very good PDF-buys at £5 each).
It was to be a game where Italian forces attacks Australian defenders behind minefields and barbed wire, with me as umpire.
As can be seen in previous posts, we have decided to do the desert-war in 6mm.


The playing-area was half a table-tennis-table. We built hills using some odd pieces of expanded polystyrene and old socks (!) and covered with a beige bed-sheet. Where there was supposed to be rough ground we sprinkled coarse aquarium-sand. The houses were free paper-models (Laffe got them, and i don't remeber where from), some odd palm-trees and scratch-built trenches, and off course the barbed wires.
The Aussies used hidden deployment (troops, trenches and minefields) and the Italian troops entered under blinds.
You will find a good after-action report in Thomas’ blog, and below some highlights. 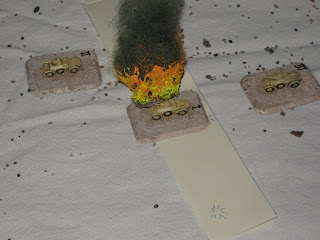 Italian recce ‘finds’ the minefields (they are found if you actively spot them end your move close, or, well, in this way) 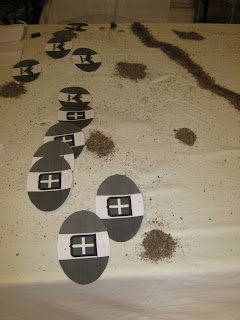 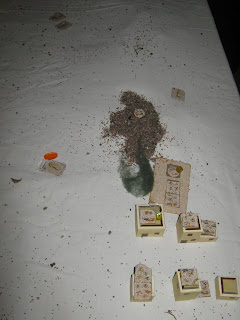 Breakthrough on the Italian left flank 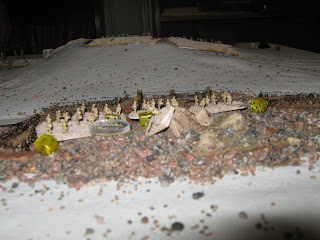 Don’t charge dug-in troops on a hill behind barbed wire! It wasn’t pretty. 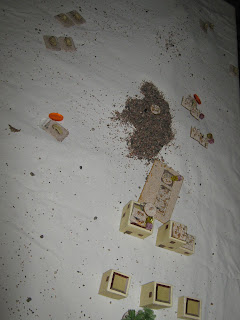 Don’t charge an immobilized armoured car. There just could be a tank following. It wasn’t pretty either. 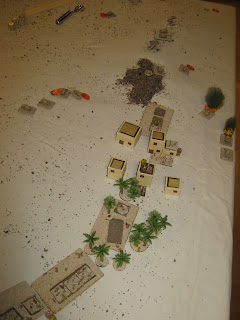 The cavalry arrives! Two Matildas and other troops appear behind the Italians.
We decided to end the game there, considering it a draw. A really tense match, with a couple of good laughs.
Our first 6mm desert scenario completed, I started to plan for more to come using the scenario-book Operation Compass, from TFL.
I placed two orders for more Italians yesterday. There will be more games!
Posted by Joakim Ström at 20:23 2 comments:

These have been on the painting table for a long time, nearly finished. Just the bases to do, and now that is fixed.
Both come from the Reaper 28mm Dark Heaven Legends-series, and will find a home in my D&D campaign. 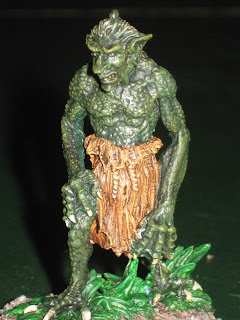 2609 Marsh Troll, painted in 2007 and waiting since then. I added a layer of Devlan Mud to dampen the colours. 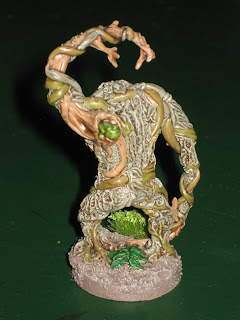 Thomas wanted some more photos of the Swamp Shambler, and here they are. Note the small frog peeping out of the backside. I missed it until I started varnishing the figure, and had to paint it afterwards. 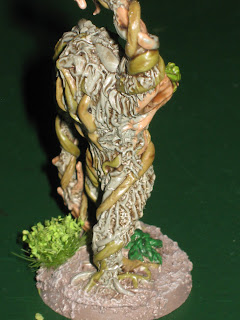 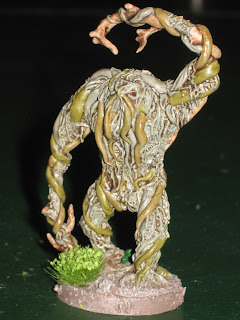 I’m a huge consumer of the written word.
The amount of books that pass my hand (or eyes…) is, well, let’s just say the bookshops loves me.
But books aren’t everything, there are magazines, booth printed and in PDF-form. I’ve got a couple of miniatures-related printed magazines in the post now and then, but it doesn’t have to end there.
The web is full of magazines for free, magazines that are really good.
Heres a selection of nice ones:


Portal
A monthly magazine about figure painting. Some news, some commercials and many articles about painting. Recommended!


The Ancible
A magazine about SF- and fantasy-games. They tried the printed way, failed, and are now web-based and free.
Figures, painting, terrain, rules and more. Really worth reading!


Warning Orders
An American society playing mainly historical miniatures games. They publish this little magazine, filled with battle-reports, reviews and musings. Really enjoyable, and as a long-time gamer I feel really nostalgic when their veterans look back on board-games such as Starship Troopers, Squad Leader and mega-games with thousands of small cardboard counters… (wiping a tear out of the corner of my eye)


For all these the rule is to down-load them all now, because you never know how long they’ll live. Unfortunately many nice magazines are dead, like Fictional Reality, Harbinger and Wargames Painting & Modelling.
I was smart and down-loaded them in time.
Posted by Joakim Ström at 19:22 No comments:

Email ThisBlogThis!Share to TwitterShare to FacebookShare to Pinterest
Labels: magazines

I put on my explorers outfit the other day, grabbed my pick, and started digging in my tin and plastics mountain. As I have mentioned before, I will really try to paint as much of my existing stuff as possible this year. My unfinished Unchartered Seas models from Spartan Games grabbed my attention, mainly because they are rather big, and also because I like the game and would like bigger forces to play with.

I have started elven and dwarven fleets, and have a orcish fleet I haven’t even begun with. Time to change that.

Fist a batch of dwarven ships. Two Heavy Cruisers and three Destroyers.
The photos on Spartan Games homepage show clean and nice dwarven ships, but that is not how I imagine them. I really don’t think the dwarves have catalytic cleaning of their exhaust fumes. I imagine them as totally uninterested in environmental management (which I happen to work with) and rather more like reapers of what the earth gives them, or they take…
The smokestacks belch out black and noxious smoke, when the cannons fire the ships will be temporarily hidden by great clouds of blackish fumes. It will not be nice, and their ships will show it.

I painted all metal with GW Chainmail, and wood in Vallejo 843 Cork Brown. The smokestacks were given a wash of Vallejo 936 Transparent Green or 938 Transparent Blue. Black in all cannons. Then everything got a heavy wash of GW Devlan Mud, and a coat of Vallejo Matte Varnish.
I used black MIG pigment around the smokestacks and all cannons, and a spraying of GW Purity Seal. 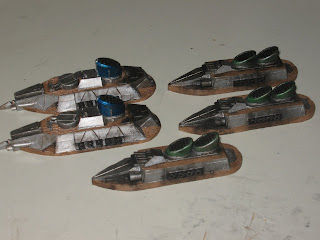 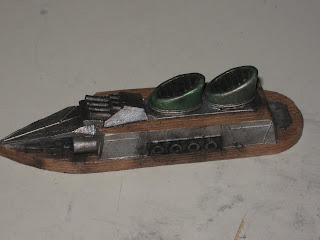 I like the black pigment, and my already finished models will get that treatment soon.

Posted by Joakim Ström at 23:06 No comments:

Well, I'm converting this blog into English. I'll translate all the articles in the coming month or so, and I'll write new articles in English from now on.
Stay tuned.
Posted by Joakim Ström at 22:50 No comments: 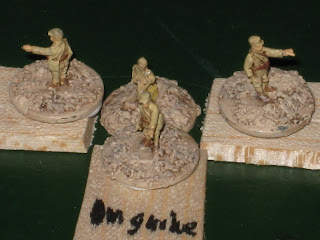 Here are the last men needed for the game last weekend. The three officers (GHQ) are telling the forward observer (Heroics & Ros) what to do, resulting in the Italians not getting even a single artillery grenade on target. Or even close.
The FO handles the heat of battle rather well, i.e. he survived. The officers had a rather shorter half-life. But they probably got some rater nice medals.
They stand on pieces of balsa, where I have written name and rank.
Posted by Joakim Ström at 15:39 No comments: 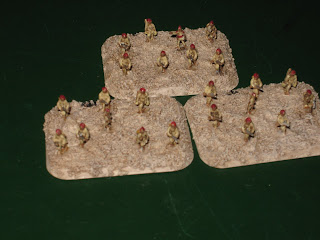 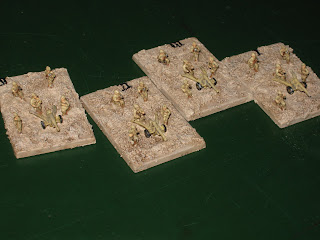 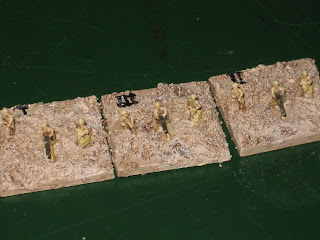 An orc chief from GW that I found deep down in the tin-mountain. It’s been there for a long time. I had no real inspiration for this figure, and it has slowly gotten more and more paint. I think I started with it in December last year… 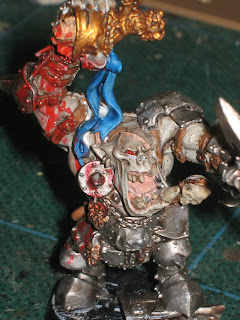 Painted ordinarily with the usual wash of GW Devlan Mud. After that I painted the eye and the blood, with a matte varnish over it all. The blue got a layer of blue wash instead of Devlan Mud.
Mouth, eye and blood got a final coating of gloss varnish.
Finished at last, and I’m half happy with the result.
Posted by Joakim Ström at 22:34 No comments: