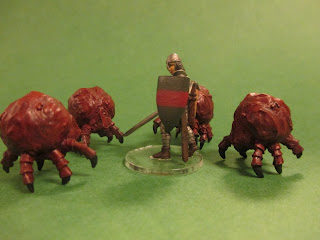 Another pack of uglies from the Return of the Monsters! kickstarter by Heresy Miniatures. These hellmites will come in very handy in our Pulp Alley club-campaign, as they will pop out of the gate that will be central to one of the scenarios. 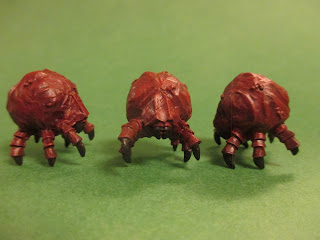 Magical Portal from Zealot (and a ghost) 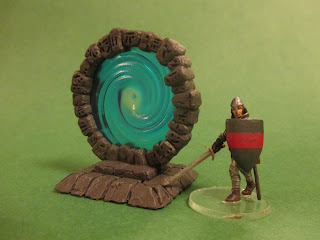 More stuff from the Zealot Kickstarter, this time a magic portal. It’s a four-piece kit, with two halves of the stone frame, the base and the translucent blue portal. It needs some green-stuffing, but nothing major. 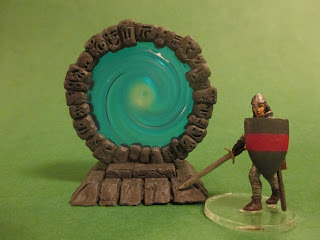 I will use it as a portal between the planes in our Cthulhu-inspired Pulp Alley campaign at the club. I'm writing a scenario around it. 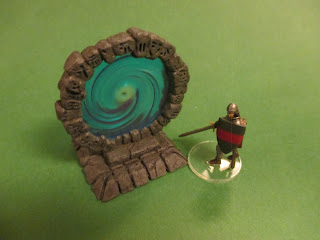 Stay tuned for some monstrous beings that might just be summoned through it during that game. 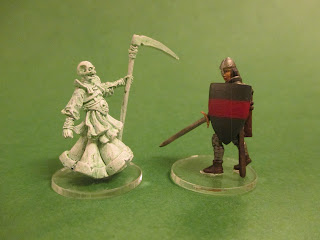 Finally a ghost, also from Zealot. 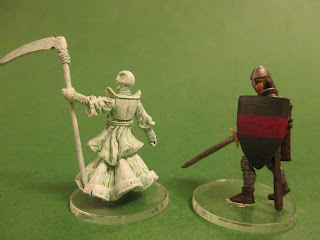 These security personnel come from the Mercs: Recon - Counter Threat box. I previously finished the EU, Inc soldiers from that box and they got a very basic paint-job. These are even more basic as they are the cannon fodder.
I started with one of each and tried out some different colors and did a repaint before I had something that looked at least okay. When I painted the rest of them I skipped some detailing and did some minor changes here and there to speed up painting.
Paints used
Armour – Vallejo 867 Dark Blue Grey
Boots – 862 Black Grey
Weapons – 863 Gunmetal Grey
All above washed with Army Painter Dark Tone. The weapons got two layers to get them darker.
Shirt and trousers – 819 Iraqui Sand
Cap and jacket – 988 Khaki
Cloth washed with AP Strong Tone


They will do, and now I just have to finish the last five soldiers from the CCC faction, and we’re ready for a first game.
Posted by Joakim Ström at 10:08 6 comments:

Spiders from Otherworld and a small dragon from Reaper 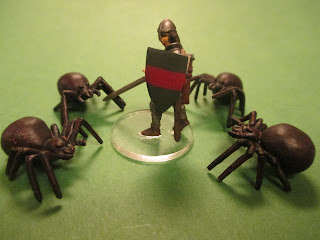 These spiders come from Otherworld Miniatures and are a rather failed experiment.
My idea was to paint them black and then let the abdomen have a hazy red shimmer on it. So I gave the black abdomen a coat of gloss varnish and then a red glaze and repeated that several times and topped with a satin varnish. The result was… somewhat disappointing.
I think the idea of varnishes sandwiching translucent layers of paint could give really interesting effects, but this was not it. I’ll have to do more experimenting and probably with an undercoat of something not so dark. 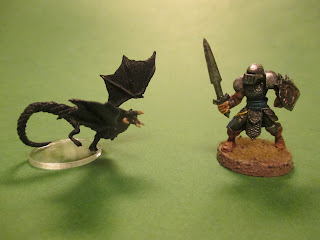 I let my daughter rummage through the case of unpainted monsters the other day to pick something she would like to have finished and she dived in, full of enthusiasm. She had a hard time deciding as the case is rather large...
What she finally picked was this young dragon from the Reaper Bones range. We checked the D&D Monster Manual and decided it was a black dragon. I just did a very fast job on it, mainly because I think black is such a difficult color (I know it is technically not a color) to work with. Well, I have to practice more, I guess. 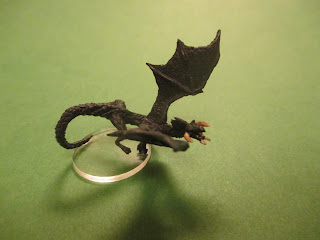 Anyway, we both thought it was great fun for her to find a figure and me to paint it up and we will continue doing this regularly, one monster and one character. For me it is an opportunity to paint stuff that wouldn’t be in the front of the painting queue. Next monster will be a Cthulhu-thingie that is really weird and the character will be a female druid that will be Johanna’s next D&D character. 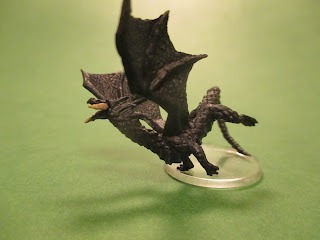 Even more dungeon scenery from Zealot

I’m still working on scenery from Zealot on and off. Here we have what I’ve painted up during the last few weeks.
Still lots of Zealot stuff to finish and I try to always have some pieces on the painting table so I can splash on some paint in between the other projects.
Posted by Joakim Ström at 10:08 8 comments:

The Story:
The very established Professor Phineas Arkley has written a series of articles on the relationships between Canaaneic religion, magic in western occultism, natural catastrophes and the influence of intelligence beyond humanity on Middle Eastern cultures. The articles has become more and more bizarre and the latest ones were even refused.
His very latest unpublished article (Non Euclidic Geometry Cosmology and the excavation of Akkhad VI) is rumoured to contain sensational information that will shake the very bastions of science and history.
Sinister things happen around Professor Arkley’s mansion, strange lights are seen during the night. The Professor sent a telegram to Logan Sudbury, Chief Publisher at Arkham Press, rambling about threats from an ancient cult that know he has opened The Cosmic Gate.
By coincidence, Anders Einstein was visiting Arkham Press when Logan received the telegram. Anders rightly sees his father as a fraud and here he have a chance to debunk his father’s outrageous theories on relativity. If only Anders can get his hands on those manuscripts, that is.
It seems more groups than Anders Einstein and his companions have the same general idea but maybe different reasons to lay their hands on the fateful article. (Read all about the leagues here)
Enough of this gossip. Let’s move to New England, and the Arkley Mansion.
The major plot-point is the manuscript inside the house. To enter you have to either speak to the minor plot points Elazaar Whately, handyman who stands in front of the house, Dr. Philip Lynott who is on his way towards the front entrance or the housekeeper Mrs Marsh behind the house. These three plot-points will remain in play after someone unlocks them and can be unlocked by several leagues.
Other plot points is a garden decoration, also behind the house, inscribed with mystic runes (if you unlock this one you will gain a special ability to be used three times in total) and a box of fireworks behind the shed (and if you unlock this one you will get the equivalent of three 3" blast attacks to be used when you feel like you need it)


That was a great start on a new campaign. As much fun as always with the Pulp Alley rules that works so well even when we have five players around the table.
Hope you enjoyed the AAR. More to come.
This first scenario was written by Jeppan.
Posted by Joakim Ström at 12:43 18 comments: