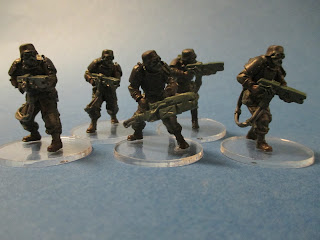 In the 1947 of the Dust alternate WWII the Axis have laser weapons and these troops, the Laser Grenadiers have the most portable versions.
The five man squad is armed with four Laser-Gewehr and one Laser-Werfer. Half-decent weapons against both men and armour.


These guys are painted like all my Axis troops.

Welcome Michael Awdry with The Analogue Hobbies Paining Challenge and 28mm VictorianWarfare. The former with lots if pics from said challenge and the latter full of historical minis, zombies, pulp and you name it. Check them out!
Posted by Joakim Ström at 10:36 8 comments: 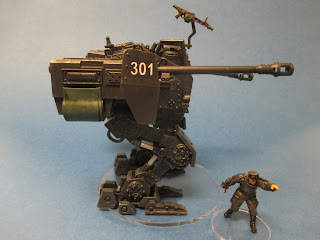 Here we have an Axis Medium Panzer Walker IIB Ludwig for the alternate WWII Dust games set in 1947. 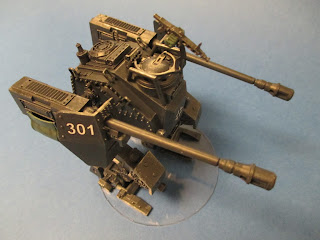 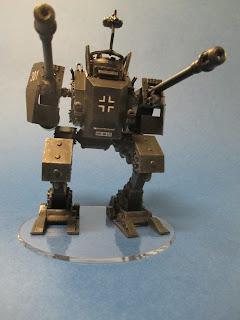 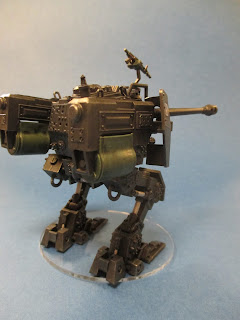 Another unit ready to face the red horde. 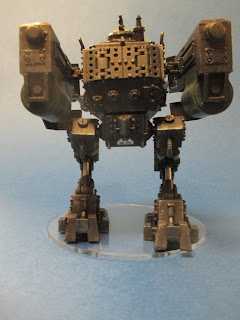 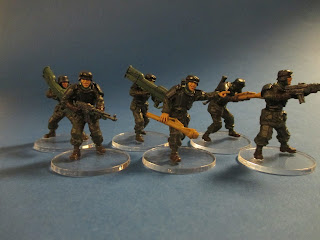 I’ve really gotten started on my Dust figures again. They are so much fun to paint and I’ve collected… well, sort of a lot of sets. I let is stand as that J. I really want to get them all painted and ready for action. 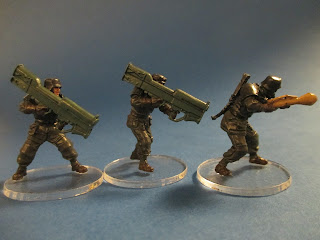 Anyway, my first priority is to paint my Germans and I’ve found an easy paint-scheme for my Axis troops that I use for all soldiers. The priority is to get them ready for the gaming table so the 'easy' part is important. 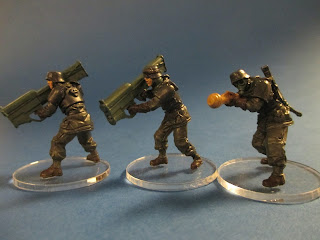 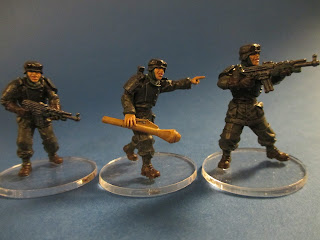 Another unit ready for action. Several units half painted on the painting table. It starts to look good. 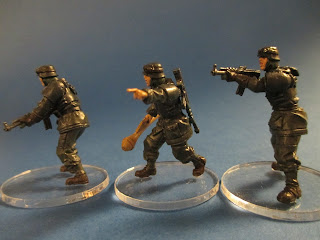 First game in a long time will be at the club sometime soon. If it works out well for the good side (aka my side) you might see a battle report here...
Posted by Joakim Ström at 10:03 4 comments:

Games of Dust Warfare do need lots of terrain and this set is perfect for that. You can buy Qunset Huts in sets of six and each model comprises the curved walls/ceiling and two end-pieces – one with a door and the other without. 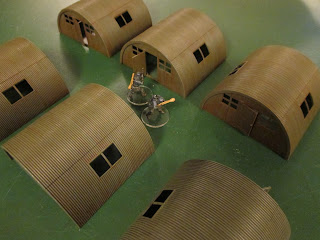 I wanted my huts to look worn and well used and tried a couple of different ways to do that.
First they were all given two coats of Vallejo 893 US Dark Green. 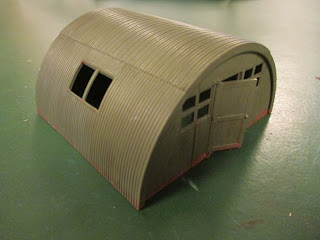 I put on Vallejo Oxid Paste near the ground and in small patches on this one above. It turned out really red and I drybrushed it with US Dark Green to tone it down and let the ‘rust’ show through in recesses. The whole thing was given a wash of Army Painter Strong Tone ink. 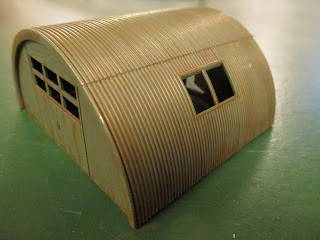 The rest was just washed with Vallejo Model Wash Light Rust. When the wash was half-dry I used the brush to make streaks in the wash and I also put on another uneven layer near the ground. 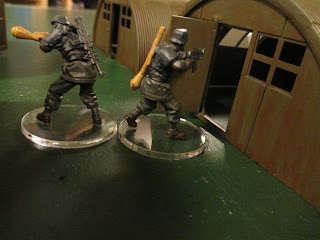 A rather fast way to get some cover for your poor infantry on the deadly Dust battlefield.

Welcome Jan Ferris with Ye-Olde-Site-of-Curiosities, a blog on Jan’s interests, for example books, board games, scale models, history and miniatures. What’s not to like? Well worth a visit.
Posted by Joakim Ström at 12:06 14 comments:

Two boxes with my name on them today.
First I picked up a parcel at the local Post Office pick-up point.
Then came DHL and delivered a big box at my door-step.
Loot from the Blood Rage Kickstarter.

Email ThisBlogThis!Share to TwitterShare to FacebookShare to Pinterest
Labels: Blood Rage, This and that 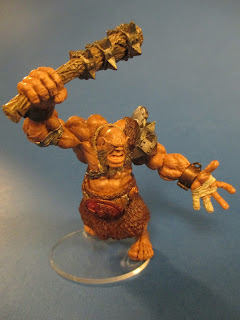 This is Hill Giant Krug, sculpted by Tre Manor and available from Reaper Miniatures both in metal (03239 at about $40) or in plastics from their Bones range (77313 for $9). I got mine from the Bones II kickstarter. 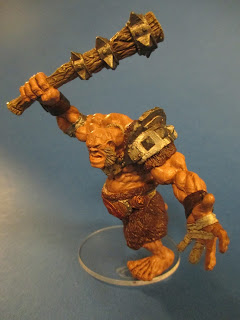 I used Citadel Tallarn Flesh with a Strong Tone Ink wash for the skin. 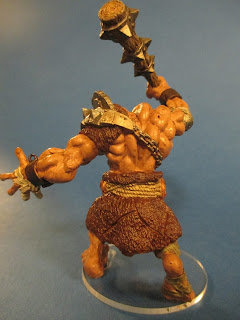 Pretty satisfied with how it all turned out.


It’s a really nice miniature and my son David drooled over the finished model and started mumbling about getting himself a new warband for Open Combat. I guess I’m going to meet this brute soon…
Posted by Joakim Ström at 11:48 9 comments:

Finally, after months of work (on and off) with the Soerabaja Harbour. We got to use it! 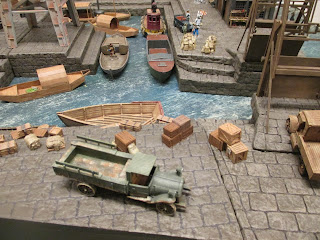 Using the clues from the At Death’s Door scenario our heroes have landed in the Dutch East Indies and Soerabaja on the hunt for Lord Darrow. Enquiries into his activities gave directions to an Old Sailor that seem to have known Darrow and also to have actually been on the island we are all seeking. 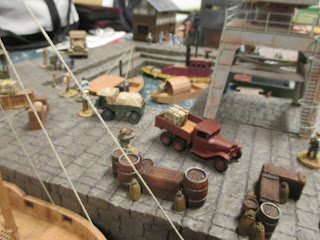 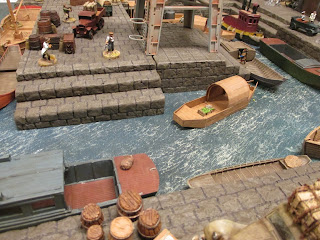 He is known to frequent the docks of Soerabaja Harbour and our heroes tries to find him there when they suddenly see both cultists and Belgians. The race is on. Who will find the Old Sailor first… and survive long enough to bring him into safety (and interrogation…). 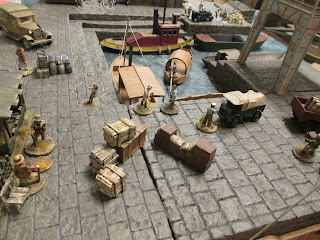 There are five different locations where it is possible to find the Old Sailor (i.e. Plot Points). Each league have to unlock at least one of these before they can unlock the Old Sailor himself and then they must hold on to him. The league in control of the Old Sailor at the end of the game is the winner (giving three reputation points and also a slight bonus next game) and having other Plot Points are also worthwhile (each giving one Plot Point).
If you're unlucky you might find a Red Herring, meaning you found a false clue and another plot point is set up close by.


Well, this was probably the bloodiest (I lost all of my league except Monsignore himself), most mobile, most exciting and funniest (obviously, as I won…) game so far. The game-board really lent itself to pulp gaming as it encourages movement and also everyone had to take more or less perilous moves jumping from boat to boat.
For once my simple plan worked
1. Unlock the first plot point with Soura - Check!
2. Unlock my second plot point with Monsignore - Check!
3. Let the second plot point be the Old Sailor - Check!
4. Use all resources to protect monsignore - Check!
As you can see, my superior tactics won the day. I'm especially impressed with how easily I succeded with point 3!
Now we are off to the Perilous Island and the next installment in the ongoing saga that is the CSSS.
Cheers!

This board will see more action....
... one club member said 'we' would need a whole 4x6' table with this stone paving, essentially growing what I had already done. WWII he said. Other periods... Endless possibilities.
... other gaming buddies talked about commando raids in WWII and Operation Seelöwe.
... somehow I have ordered a big submarine-kit. How on earth did this happen?
To be continued, without a doubt.
Posted by Joakim Ström at 10:14 32 comments: