It’s been a rather slow couple of weeks when it comes to modelling. I’ve been busy with work, gaming with the toys I have (What a Tanker has hit the table a couple of times, and it is a very fun game), the garden need a lot of attention, our summer-place got a leaky roof that needs taking care of and weather here is amazingly good - we have had a month of excellent summer in spring. So it’s been slow. 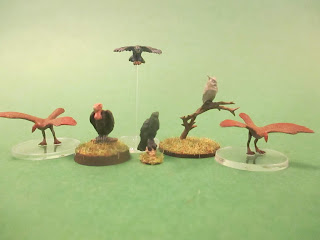 Anyway here is a little something. I was inspired by a blog-post on animals the other day and rummaged around in the mountain for some birds that I had already prepped. Some internet searches for photos of said birds as inspiration and I started.
These are the first ones finished. 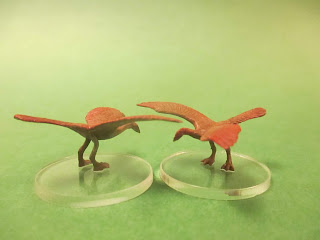 Archaeopteryx. Okay, not a bird and no photos for reference, but they got wings and will certainly be aggressive in some game in the future. They come from Tamiya’s excellent 1/35 scale Mesozoic Creatures set (you will see much more of that here) and are twins as I bought two boxes. 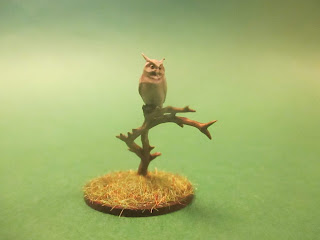 The owl is from Mantic. I’m not sure from which sprue, though, but probably some elves. It’s a nice but not great little bird. It sits on branch from a sprue of some sort of living tree-thingies GW had way back. 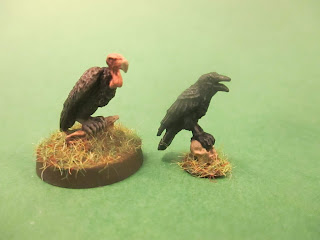 A vulture and a raven from Reaper. The raven is so-so and very large, and I painted it more like a crow. I rather like the vulture. Both come from the Familiar Pack VIII. 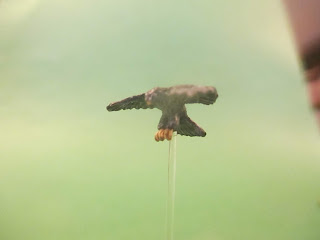 Finally a hawk from Otherworld’s Lesser Familiars pack. It’s just a great little model, as usual from Otherworld.
More birds to come shortly, and even more in a little while (I seem to have made a little purchasing-mistake…it's all Koen's fault!)
Happy gaming and modelling!
Posted by Joakim Ström at 10:13 4 comments:

This is a scenario from Tomb of the Serpent, a campaign for Pulp Alley. I play it using the Solo Play and Pulp Horror rules from that campaign book. The heroes are the CSSS, and you can find a short description of them in the previous adventure. You can find info on most of the terrain in the last couple of months' blogposts.

In the last adventure, The Haunted Dungeon, our heroes failed miserably in their quest to find an ancient artefact needed in their quest to stop the rise of an ancient Egyptian god, Aphopis. One glimmer of hope was a pamphlet for a travelling carnival that Monsignore found in the dungeon. On it is scrawled “Hail Lord Aphopis”. If that is not a clue, then something fishy is going on.
As luck has it, the carnival is camped just outside Rome. Our heroes, boosted by a couple of backups, head for a day of merriment. Everyone looks forward to a day in the sun, candy floss, balloons, raffles and maybe even romance…


Our heroes are actually enjoying the day out, observing the carnies and revelry makers. Somewhere here is someone who knows something, or even someone who’s got an artefact. After a while they have identified some likely suspects that are sure to have important knowledge.
With that Aphopis cannot maintain control of his manifestation anymore and it disappears in a puff of sulphurous smoke.
The league limps out from the carnival. This time it worked. They have one of the ancient relics, the Ring of Pharaos, and all the possible clues to be had at the carnival.
This was a roaring success.
A double success, thinks young Mr Nittin who will actually kiss all those wounds on Suora Maledetta tonight. But that is another story.
And that is it. They will return to the Vatican to recuperate, study the Ring and all the clues. That map seem extra interesting, might it lead to another adventure?

As I read through this I just realized I had made a huge mistake; Soura Maledetta is a follower, and as such when she is knocked down she stays knocked down, and I had instead let her recuperate time and again.
Well, I wasn't about to re-play the whole scenario, much less write a new AAR, so instead:

Monsignore sat studying the Ring of Pharaos when he noticed something... a faint inscription saying "Made in India"...