On the painting table 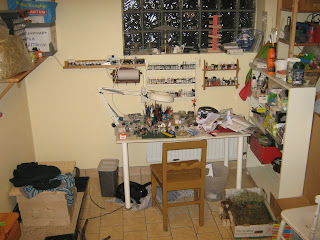 Painting table and killer rabbit
First of all, my painting space has expanded. Got a bookshelf close by now, so I have more space for some of my terrain materials, tools, balsa wood, wires and other stuff. Also up is a large shelf where I put a bits-box and paints (army painter dips, bigger paint pots etc). In picture you see ‘Puffe’, the rabbit with killer teeth. He is rather nice and lives in our converted garage, now storage and hobby room. But I have to keep stuff (especially electric- and phone-cables) out of his way, or snip-snap… He is soon reaching ace-status on cables…
On the table is, by the way, a telephone with an amputated cable (to be fixed by me, they say)... and some paper-figures I build with my daughter.
As usual quite a lot on the table. Need a bigger one I guess. 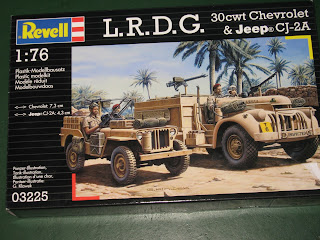 LRDG-heroes in the making
20mm. We, i.e. Scandinavian Lardies, have decided to go to North Africa at next years’ convention-games, and specifically a LRDG/SAS-raid on an Italian airfield. For that I just bought the Revell LRDG/SAS kit, and I’m looking at several other manufacturers, to find more vehicles. Also looking at ebay for suitable (=cheap) Italian planes to be blown up. It will be the first time in 35 years or so that I build and paint a plane…
I plan to start building the Revell kit as soon as the current batch of 28mm figures are finished. For once we’re out in good time, so we will hopefully avoid the traditional panic-builds from earlier cons J
Will have another go at ‘cloth’ camouflage for my Finnish Bofors gun, I guess my blood pressure is back to normal. I have a couple of more ideas, and want the gun finished this year. Got an idea for Finnish crew also, but that will come later.
Lots of early war English stuff waiting for me to mix the correct colours. I must do that during the holidays. 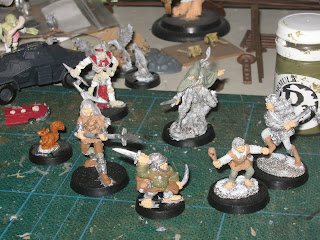 Paint me, Master! No me first!
In 28 mm I have mined a couple of figures from the tin-mountain, some females (hmm, I wonder why there seems to be an abundance of those…?) and two hobbits/halflings. They will hopefully be finished soon.

Still working on familiars, and finding some now and then in different boxes. 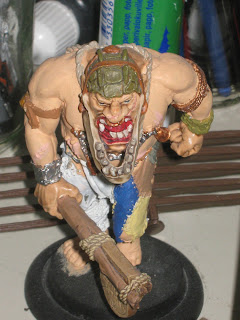 Giant pain in the...
The GW giant still looks at everything happening on the table, and he gets a blotch of paint now and then. I have promised myself that he will be finished within the next five years or so. Seriously, I want him off the table, another project for the holidays. Why did I buy him in the first place? Oh, a sale… 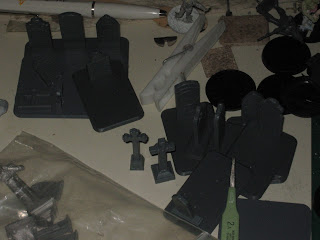 Digging a Renedra graveyard
I bought some 28mm grave-stones from Renedra a while ago, they are in the process of being put on suitable bases, and will soon be painted. There are also some other grave-stones from the bits box. There will be a lot of them, a whole grave yard… usable in multiple settings. 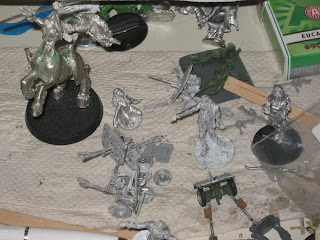 Soon to meet the paintbrush
Also some odd figures more or less started - modern zombies, a centaur, skeleton, lovely Echo and more.
In 6mm I have a lot of finished Italian artillery pieces waiting for crew. These are bought and just waiting for the paintbrush. After that a lot of Italian infantry to be made for Operation Compass.
Enough writing, back to the painting table.
Posted by Joakim Ström at 17:07