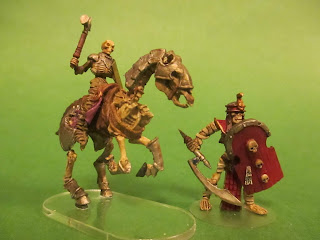 A couple of minis I had had half-finished in the tin-mountain for a time, a very long time for the foot-soldier…
The skeleton rider is mostly a Guardian on Horseback from Gamezone. That model is multipart and the skeleton guardian’s upper body, arms and weapons were a bit of a mess to get together. That effectively moved the model to the mountain for a long stay, until I had it out the other day and had a sprue of Mantic skeletons in front of me, too. 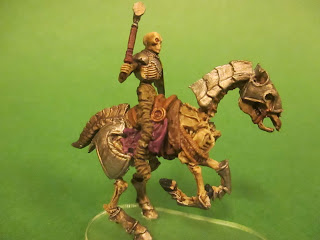 Some glue and green-stuff and I had married the upper body of a Mantic skeleton to the lower body of the rider. Really satisfied about that.
It was quickly painted and turned out rather well. 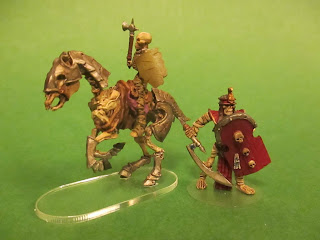 The foot soldier is an old GW skellie, from their Tomb Kings series. I have a couple already painted (10+ years ago) and this was mostly ready, just needed some details and a wash. Said and done. Half an hour's job and I had another mini ready for gaming.

A little end-note: If you're a Google+ follower then it is time to change the way you follow this (and other) blogs, as Google+ dies in early April. So it is time to either become an ordinary follower or follow by e-mail.
Posted by Joakim Ström at 22:41