We’ve started a Wild West campaign at the club using the Fistful of Lead rules. They are really easy to learn, but not in any way simple. Two games in and we are really enjoying ourselves and the carnage that inevitably ensues.
The games inspired me to finish some figures, print some suitable stuff on the 3D-printer and go over the houses I already have and improve them somewhat. 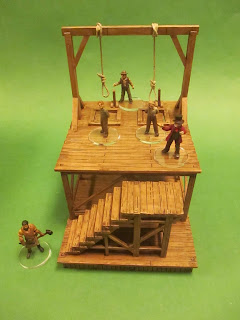 First off is the gallows. I assembled and painted one from 4Ground a while ago, and now I dirtied it up with a wash. Nothing much but it does make it fit in with what other stuff we have at the club. Let’s say it’s a bit of a grimdark past.
I also had some unpainted crew and…customers… for the gallows, and they got a quick brush-job. Beside the gallows is a blacksmith from Shadows of Brimstone. 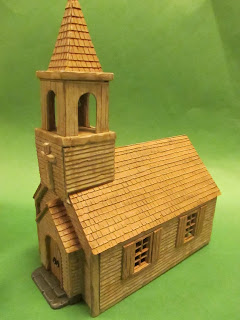 Next were some houses from Renedra, the American Church and a Farmhouse. They were also already painted and assembled, but got a couple of washes to look worn down. 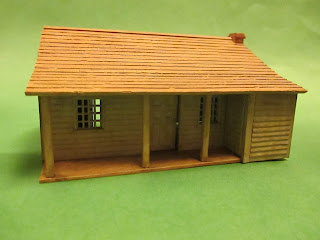 One thing that is usually sadly missing when it comes to Western towns in 28mm scale, is outhouses. There ought to be quite a few of them and they do present some excellent cover. 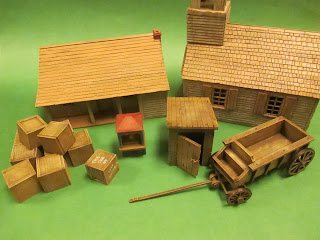 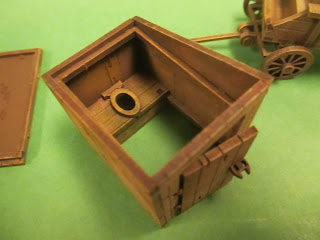 I had a build but unpainted one from 4Ground (I think) that got a paintjob and a wash making it look…lived in… or well used. I think this will belong to the Saloon… 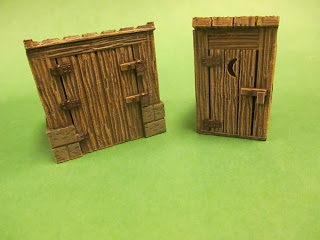 Then I printed two small shacks from Hayland Terrain. One is a sturdy shack, maybe filled with dynamite, and the other a conventional outhouse. 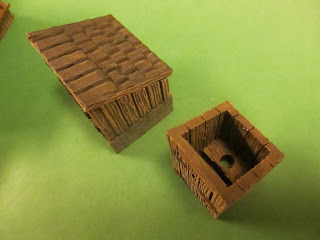 On top of that I also finished a couple of wagons, crates and some other small stuff.
Finally some photos of the last two games. The heroes are Killer Kim's Killers, a gang of kind-hearted desperados that love kittens and help old ladies cross the streets (preferably in cover behind them). 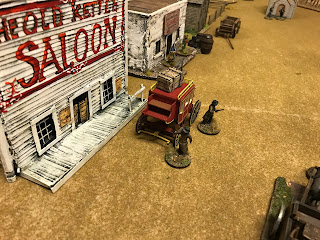 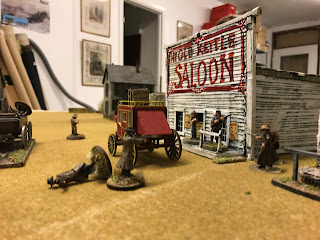 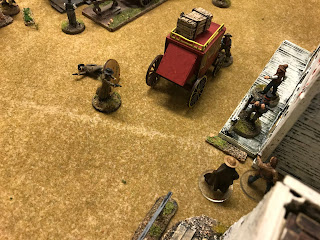 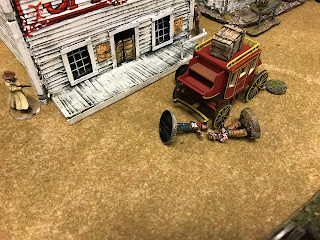 Read of the first game here. It is of course filled with lies, but it will have to work.
Another game tonight. Should I go for a sneaky game and actually get some loot or the usual all guns blazing approach? Hmm, brawn or brains?
I think I know the answer to that…
Posted by Joakim Ström at 10:50